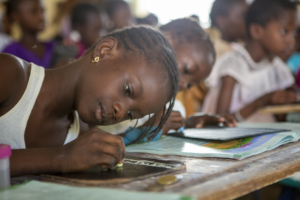 Education is a luxury many people take for granted, but it is something poverty-ridden families often sacrifice to have. Globally, over 250 million children and young adults are not in school. As a result, around 617 million young children and adolescents around the world are unable to read or do mathematics within the minimum proficient level. Poverty is one of the main reasons for this tragedy and it often comes from generations prior that also lacked schooling. By properly educating new generations, poverty rates could reduce significantly. Here are some ways that proper education will help end poverty.

Estimates have determined that in developing countries, one-eighth of all children are born malnourished and that about 47% of those in low-income countries will continue to experience malnourishment until they reach the age of 5. Poor nutrition is a direct result of poverty and often linked to insufficient knowledge of proper nutritional diets. A study that occurred in 13 different countries found that the standard yearly gain production increased with those with basic education by 8.7%, which in turn increased food security and helped lower rates of malnourishment in children.

Education will help end poverty because, with basic education, parents learn more about how to care for themselves and their families, which in turn leads their children towards healthier lifestyles. Health education gives families have a higher chance of survival and even reduces rates of HIV and AIDS.

Education will help end poverty because it is particularly powerful for girls. Education has many effects on girls and women, but a primary impact is that if all women in poverty finished primary school, then the child mortality rate would reduce by almost 17%. This adds up to about 1 million newborns saved every year, but how does saving lives help lower poverty rates?

With schooling, women could more easily recognize danger signs in pregnancy and be able to seek care faster. Women with more knowledge about their body, pregnancy and childbirth have a better chance of giving birth safely. Records have determined that a child with a mother who had basic education is 50% more likely to surpass their fifth birthday.

Income is, of course, a huge factor in poverty. Records have stated that if someone has basic education (that is, reading, writing and mathematical skills), this not only has a positive impact on their own income but can also “increase the rate of return on the economy.” Those with education have a much higher chance of getting better jobs with higher wages. Just one year of education can result in a 10% raise in pay. More pay means better, more nutritious food, better access to sanitation, better access to healthcare and better housing.

For example, Vietnam was one of the poorest economic countries in the world due to its 20-year war. However, since 1990, Vietnam transformed its poor and war-torn country into a GDP that grew to 3,303%. Its economic growth rate was the second fastest and the main strategy for this success was the improvement and modernization of its education system. Vietnam is only second to China, which also implemented a new education system, causing it to have the number one fastest GDP growth.

With children attending schools and developing both important skills and abilities, they will one day get better jobs. The more income they have, the more goods and products they consume which benefits the companies. This in turn increases the demand for the production of more products, thus giving jobs to more people and helping the economy grow. These changes and more will be key in eradicating poverty around the world.