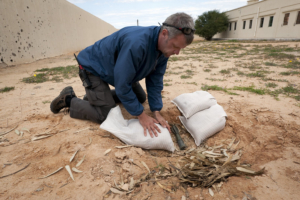 Civilians across Libya face a unique challenge in their daily lives: avoiding landmines. Both the United States and the European Union remain committed to building a safe community for Libyan civilians by working with groups pursuing demining in Libya.

How We Got Here

Libya is a coastal city in northern Africa. The Government of Libyan National Unity (GNU) was established in March 2021 and a group led by warlord Khalifa Haftar controls the country politically. States surrounding Libya began independently supporting the two competing groups, with countries such as Egypt supporting Hafter and Turkey supporting the GNU. Another power that joined in aiding Haftar is Russia and a Russian organization called the Wagner Group.

Currently, the Wagner Group continues to occupy and influence parts of Libya, especially in the east. It continues to assist the Libyan National Army (LNA) under Haftar despite the ongoing war that Russia faces in Ukraine.

In 2020, the Wagner Group withdrew from Tripoli, the capital of the country located along the coast in western Libya. According to several sources, the organization left landmines in the area in the process of withdrawing, leaving Libyan civilians in a dangerous situation. The remaining landmines resulted in more than 300 innocent deaths or injuries in the past two years.

Through partnerships with the United States, European Union and nongovernmental organizations (NGOs), the present dangers mobilized communities in Libya to come together and address the issue.

Present dangers in Libya include landmines, improvised explosive devices (IEDs) and unexploded ordnance (UXO). Not only are these weapons remaining from the Wagner Group in the ongoing Libyan civil war, but there are still weapons from wars dating back to World War II. Three organizations that specialize in demining in Libya receive funding from the United States and represent a significant impact in eliminating the risk of more than 60,000 explosives in the last 11 years.

The European Union similarly coordinates three demining projects with several organizations including 3F, also known as Free Fields Foundation. Rabie al-Jawashi started 3F in 2012 in Tripoli. The organization now has 60 working members and received accreditation from the Libyan Mine Action Center. Rabie’s organization primarily focuses on areas near the coast and is making a large impact on the safety of families returning home after the war. In a mere eight months in 2020, 3F destroyed over 1,050 explosives in their focus area.

Many success stories arose from the Free Fields Foundation since its establishment. One example is the case of Saud Abdel Rahman and his family located in Sirte, Libya. After seeking refuge in a neighboring city during the war, Rahman’s family returned to find their farm in ruins. After seeing phone numbers for 3F on local billboards, Rahman contacted the organization, which removed landmines from his farm. This allowed the family to continue farming. Rahman also noted that his children personally experienced mine safety education in their school, thus illustrating the real-world impact that 3F creates.

Apart from demining field work, 3F also works to educate Libyan civilians on mine safety. Members of the organization inform families on the correct steps to take if families locate explosives and collaborate with regional groups to instruct children in local schools.

The United States government also strives to inform civilians on the proper contacts and risk prevention to safely eliminate explosive risks. Further, the United States promotes the GNU’s humanitarian and economic development endeavors by offering support to the Libyan government.

With landmine education and renewed funding from the United States, European Union and other critical partnerships, demining in Libya continues to embody a community effort for the safety of Libyan civilians.