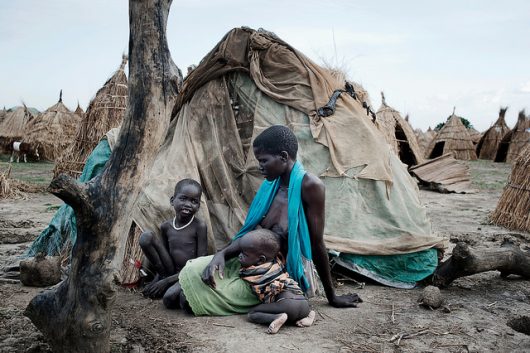 Ravaged by civil war for nearly 50 years, the once unified countries of Sudan and South Sudan were left devastated with dilapidated economies. The brutal civil war ensued when Sudan was freed from British control after being a colony for nearly 60 years. Poverty in the country is a multi-sided issue that is not simply defined by a statistic that reflects the number of citizens living at or below the poverty line. Literacy, health care and food security are all causes of poverty in South Sudan.

Seventy-three percent of adults are illiterate, including 84% of all women. Without access to educational resources, the people of South Sudan will continually live in a cycle of poverty. These illiteracy rates fuel the major unemployment situation. With an unemployment rate sitting at 12%, the lack of employed citizens continues to be one of the major causes of poverty in South Sudan.

South Sudan is a vast landlocked country but the population suffers from a lack of developed cities. Eighty-three percent of the 11 million people in South Sudan reside in rural areas without access to many basic necessities. Eighty percent of the population lives on or at $1 a day in part because they live away from cities. Without that access to employment and career resources, the South Sudanese are hindered from aiding their country and themselves.

Eradicating poverty requires a healthy and vaccinated population, something that South Sudan does not have. Lack of healthcare has been a cause of poverty in South Sudan and will continue to be until certain precautions are taken. With only 17% of children fully immunized, the population is severely disabled when it comes to combating diseases. This causes poverty, as a dilapidated population cannot sustain itself.

The causes of poverty in South Sudan repressed growth and development in the third world country. The civil war the country endured set the stage for poverty. It will require aid and assistance to bring this country stability.

Causes of Poverty in MaliThe Cost of Living in Ireland: Northern vs. The Republic
Scroll to top