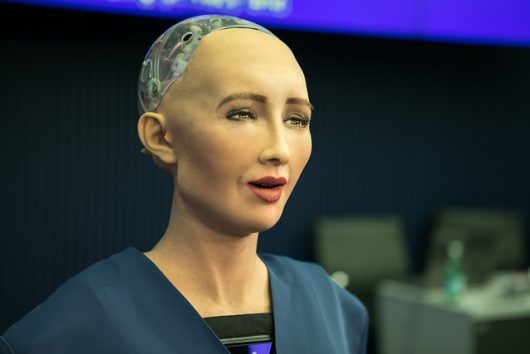 In 2007, the iPhone had first made its appearance on the world stage. Since its release, phone-based computer programs (apps) have evolved from simple games like Space Invaders: Infinite Gene, to industry-upsetting business models like Uber.

Since apps began to use algorithms to create relatively simple artificial intelligence (AI), computation has become vital to leading businesses and organization. Ten years ago, AI was almost entirely task-based, but a new form of AI—known as deep learning—has garnered more attention in the past few years.

Instead of a programmer telling how a certain machine should do a task, deep learning AI uses neural networks which actually teach the computer (or other deep learning AI) how to complete tasks in the most efficient manner. What makes it so special is that deep learning is faultless, and, with enough computation resources, can learn things faster than humans.

Does this finally mean that the age of robots is upon us? The easy answer is yes. Deep learning machines have now outplayed people in chess, Go (widely considered to be the most complex game in the world) and are possibly are going to try to beat humans at StarCraft, a multiplayer video game. But AI can disrupt the world’s economy in significant ways. Corporations use it to trade in the financial sector; write articles for newspapers; diagnose health disorders and diseases and do manual office work. It has even recreated a Nobel prize-winning physics experiment.

In the last decade, we have discovered that deep learning AI and AI has infinite potential. So, the question goes, how will artificial intelligence and poverty correlate? Can AI reduce poverty? In general, it should. Never in the history of mankind have we let machines do this type of work for us, so we have no precedents to build off of. Additionally, because deep learning machines are only just coming onto the marketplace, new obstacles may appear as we continue AI research.

However, people are beginning to harness this extremely powerful tool for the poor, and the work sounds promising. At the moment, AI is especially useful for data mining simple statistics: which areas need more development, which people require more education and how they can receive it, etc. Having to collect this data manually would be a time-intensive task that would also be incredibly expensive.

However, there are also more complex uses for AI, such as agricultural research for poor farmers. Tech giant IBM is working on an operations research robot that will optimize transporting food aid around the globe. Improvement of artificial intelligence and poverty reduction are thus parallel goals for these major corporations.

In addition, IBM is also working on a novel illiteracy project. If eventually implemented, it will allow people to learn how to read without the assistance of a teacher by having a computer analyze something that a student of any age might find in their daily life (such as a flower). The computer would then display the written word while playing the sound for it. This would allow people to learn how to read wherever they are, whenever they have time.

Of course, these are all leading edge uses when talking about artificial intelligence and poverty. While engineers continue to work on the technical aspects of the technology, the U.N. is preparing for the change in methodology in battling poverty by holding AI summits. Twenty U.N. agencies have and will continue to discuss issues pertaining to the Millennium Goals and the Sustainable Development Goals in relation to AI.

The potential to significantly diminish poverty with these new technologies is very high. It might take humanity decades before AI is actively fighting poverty, but when it does, it will most likely help eradicate it.

One main challenge of AI is to make sure that we can control it. Futurologist Elon Musk, along with world renowned physicist Stephen Hawking and many AI experts have signed an open letter warning the U.N. against the use of AI-powered weapons, as they can potentially develop their own ethics standards and kill humans ceaselessly, regardless of their affiliation. Even though this warning specifically targets militarized robots, it is a cautionary tale: we need to tread carefully when using new technology, which is why AI will only truly take off several years into the future.

Poverty Rate in Uzbekistan Significantly Lower in Recent Years Why Is Haiti Poor?
Scroll to top