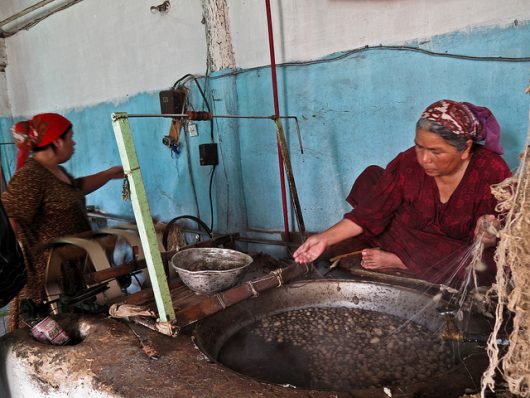 Since gaining independence in 1991 after the fall of the USSR, Uzbekistan’s prosperity has grown by leaps and bounds. Located in Central Asia, just south of Kazakhstan, Uzbekistan has become the fifth-largest cotton exporter in the world and is quickly growing its gold and natural gas industries. Its forecasted GDP growth for 2017 is seven percent, which is well above the 3.2 percent average of other Central Asian countries. In fact, Uzbekistan’s GDP has more than tripled since 2007. Despite these exciting changes, there is still much room for improvement, particularly concerning the poverty rate in Uzbekistan.

Lack of employment is a major issue for Uzbekistan, with 12.8 percent of its population living below the poverty line. Since becoming a sovereign nation, a time when Uzbekistan’s economy was in flux, the country has become dependent on its exportation of its gold and cotton products; however, these commodities are tightly controlled by the regime, with much of the profits lining the pockets of the wealthy leaders, leaving many average citizens high and dry. Job stagnation also hurts the poverty rate in Uzbekistan as the number of Uzbek citizens of eligible employment age has increased and industries with little room for growth dominate the country.

Because there is little money to be made in Uzbekistan, many people migrate or work abroad, usually in Russia or Kazakhstan. The citizens often face harsh repercussions including harassment from Uzbek security services and government interference with remittances. These poor economic conditions, along with restrictions on human rights and religious freedoms nearly thrust Uzbekistan into a civil war during the Andijan massacre in 2005, when hundreds of protesters were shot dead for demanding their president’s resignation.

In 2016, a new Uzbek president was elected to office for the first time in 25 years: Shavkat Mirziyoyev. Since taking office, Mirziyoyev has partnered with The World Bank in a five-year strategy to use a $100 million loan for the creation of 500,000 new jobs. The goal of the plan is to decrease the poverty rate in Uzbekistan and to help the country reach upper-middle-income status by 2030.

Although there is still more progress needed to improve the livelihoods of average Uzbek citizens, it is important not to understate the growth and development that has been at work in the country for decades. Since 2001, the poverty rate has been cut by more than half. These numbers, along with new leadership and the implementation of the stimulus package being proposed, give hope to the prospect of a wealthy and economically secure Uzbekistan.