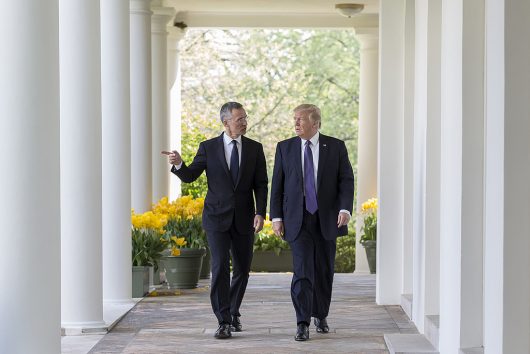 The Trump administration’s proposed cuts to the International Affairs Budget would slash U.S. foreign aid to levels not seen since the ’70s and ’90s. Foreshadowing these proposed cuts, President Trump remarked during his campaign that America should “stop sending foreign aid to countries that hate us.”

In a March 2016 interview, Trump also commented on the purported futility of foreign aid as he spoke about building schools in Iraq: “I watched as we built schools in Iraq, and they’d be blown up. And we’d build another one, and it would get blown up… And yet we can’t build a school in Brooklyn… at what point do you say, hey, we have to take care of ourselves.”

How does President Trump’s position on overseas assistance compare with other U.S. presidents? Here are five quotes from former presidents on foreign aid:

These quotes from former presidents on foreign aid highlight the longstanding history of American engagement overseas. Here are two examples of these sentiments in action: firstly, the Foreign Assistance Act of 1948, otherwise known as the Marshall Plan, played a vital role in helping to rebuild Europe after WWII. Consequently, the European Union is now the largest trading partner of the U.S. Secondly, George W. Bush’s investment in the PEPFAR initiative continues to save countless lives from the scourge of HIV/AIDS in sub-Saharan Africa and is widely acknowledged as a remarkable success.

Foreign aid serves many purposes: ensuring national security, promoting humanitarian values and advancing U.S. economic interests overseas. Disengaging and ceding our leadership in this regard is not in our nation’s best interest. The above quotes from former presidents on foreign aid present a different vision for U.S. leadership overseas than from the isolationist approach outlined by President Trump.

Thankfully, with Trump’s proposal “dead on arrival,” it appears many members of Congress concur with these former presidents on the value of foreign aid and the vital role it plays in pursuit of the national interest.