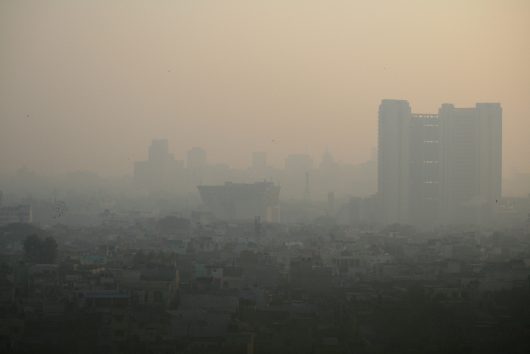 Ranked last out of 132 countries in an air pollution survey, the Indian government is scrambling to find a solution to combat the pollution in India. Their answer may lie within the electric car industry.

The energy minister of India announced in May that by 2030 every car sold in India will be electrically powered. The government is assisting the renewable automobile industry for the next two to three years until the market stabilizes.

This solution comes at the right time as India’s air toxicity levels surpass China, making India one of the most toxic nations in the world.

One major factor contributing to the country’s horrible air quality is high levels of fine particulate matter, especially those particles smaller than 2.5 micrometers in diameter (PM2.5). The level of PM2.5 is five times the threshold of what is safe for human beings, 13 times greater than the World Health Organizations’ annual recommendation, and 3.5 times greater than India’s air quality standard.

High levels of PM2.5 is particularly concerning as it is the leading cause of Acute Lower Respiratory Infections (ALRI) and cancer, and children under five in India contribute to 13 percent of inpatient deaths from ALRI.

In New Delhi, the air pollution has been 45 percent worse than Beijing in the last two years. Additionally, the city’s pollution has increased citizens risk of lung cancer by 70 percent, chronic respiratory by 50 percent and ischemic heart disease by a little more than that. Also in India, the number of deaths caused by air pollution is only “a fraction less” than deaths from tobacco use.

With such high risks due to contaminated air, the overall promise is to lower pollution in India. This goal can be accomplished through introducing electric cars and requiring that every car sold in India be electrically powered.

Studies show that electric cars are drastically safer to the environment and public health. In fact, hybrid/electric cars will drastically reduce nitrogen oxide released by up to 99 percent and carbon dioxide by up to 71 percent.

Although the electric car industry will need between two to three years of government assistance until the public starts buying the vehicles, the pros of switching to electric cars have a positive effect that can help reduce pollution in India and help save lives.