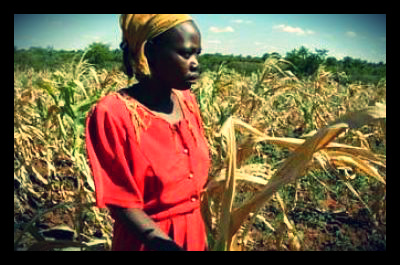 `
Zimbabwe announced plans last Friday to import 150,000 tons of corn from South Africa in attempt to stave off the threat of mass starvation as poor crop yields and bad credit plunge the country into its worst food crisis in years.

A UN report found that at least 2.2 million Zimbabweans will require food assistance before the next harvest season to survive. Many people in rural areas are subsisting only on what wild fruit they can find.

Zimbabwe was once known as southern Africa’s breadbasket, but is now suffering low yields of its staple crop due to last year’s droughts, the late arrival and poor distribution of rainfall and an infestation of army worms. Economic collapses and poor planning by the government exacerbated the bad growing season, and Zimbabwe was able to produce only 800,000 of the 2.2 million tons of corn necessary to feed its population.

Scarcity has driven the price of corn up 20 percent since 2012, according to the to US-based Famine Early Warning System (FEWSNET).

“Communities, especially rural ones, are facing a twin evil: food is scarce, and that tends to push prices up,” Innocent Makwiramiti, an economist and former executive officer of the Zimbabwe National Chamber of Commerce, told reporters.

“The government has no money to import enough grain so that people can buy it at subsidized levels,” Makwiramiti said. “The hungry are therefore forced to buy from private sellers, who charge high prices.”

Zimbabwe’s hyperinflation and resulting economic freefall, which many critics blame on President Robert Mugabe and his chaotic ascension to power, threaten the country’s ability to borrow to feed its citizens.

In the past, Zimbabwe has combated inflated food prices by importing grains on credit from neighboring countries like Zambia, many of whom are no longer willing to gamble that they will be paid back. In October, Zambia reversed its decision to give Zimbabwe 150,000 tons of corn on credit, instead requesting cash up front.

Zimbabwe managed to obtain only 14,000 tons.

Many Zimbabweans are angered by the response from President Mugabe and his ZANU PF party, who have acknowledged the food crisis and promised that “no Zimbabwean will die of hunger” but have yet to reveal any concrete plans to address food scarcity or the underlying economic problems ravaging the country.

In addition to a poor growing year and an economy in free fall, Zimbabwe’s food crisis has roots in Mugabe’s violent redistribution of land in 2000. Many white landowners fled the country as government forces seized their farms.

Instead of turning land over to Zimbabwe’s poor black farmers, as he had promised, Mugabe gifted properties to leaders of his ruling party, whom left much of it unattended and improperly cared for. Ironically, the farming surplus that Zambia has experienced, allowing them to sell corn to Zimbabwe, can be attributed at least in part to white farmers chased out of the country.

It will take time for Zimbabwe’s economy to rebound, but its people are dying now. The 150,000 tons of corn recently granted by South Africa will help some, but without money or credit, Zimbabwe and its citizens will be largely dependent on food aid from international organizations. Now is the time to get involved.