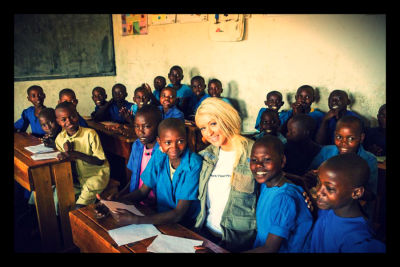 Christina Aguilera is a pop singer that has remained popular since the 1990’s. She is best known for her powerhouse voice, acting roles and position as a Judge on NBC’s “The Voice.” Aguilera has been given the title of “Princess of Pop,” “The Voive of Her Generation,” “One of the Best Vocalists in the World” and “Queen of Reinvention.”

However, Christina Aguilera is not as well known for her role as a humanitarian.

In the past, Aguilera has supported many charities, including the Red Cross, Refuge, World Food Programme (WFP,) World Hunger Relief and more. She has recorded a John Lennon song in order to raise funds for Amnesty International. She has also raised awareness and funds for Haiti following the nation’s tragic earthquake in 2010.

Recently, she worked as an ambassador for the Yum! Brand to help raise over $37 million to fight world hunger.

The funding goes toward Yum!’s WFP disaster relief and school meal programs. David Novak, Chairman and CEO of Yum!, stated that with the help of Christina Aguilera, the brand was “able to raise more awareness than ever about this critical issue.”

Yum! Brand is a company that owns the Kentucky Fried Chicken, Pizza Hut and Taco Bell franchises. The organization’s World Hunger Relief is the world’s largest private sector hunger relief effort and includes over 130 countries and over 1 million employees and associates.

Novak believes that “it is unacceptable that nearly one billion people around the world are going to bed hungry every night. We believe that it is our privilege and responsibility to do everything we can to make a difference in fighting world hunger to save lives.”

Since 2007, the WFP has raised over $185 million to help combat world hunger.

Sources: MusicTimes, Look to the Stars
Photo: ME News Wire