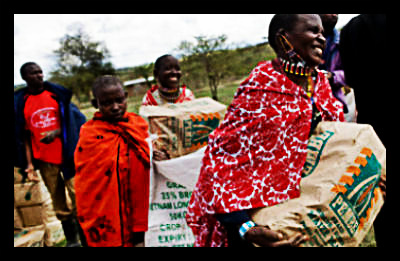 In 2007, Yum! Brands Inc., the world’s largest fast food restaurant, created the World Hunger Relief program. Using its nearly 40,000 stores and 1.5 million employees, Yum! Brands Inc. leads the most expansive private sector hunger relief effort. The World Hunger Relief and international superstar Christina Aguilera are teaming up to help save the nearly 1 billion people around the world who are hungry.

Consisting of KFC, Pizza Hut, and Taco Bell restaurant chains, the company uses its network to raise awareness and funds in order to benefit the United Nations World Food Program (WFP) that reaches more than 90 million people worldwide. Since its inception, the World Hunger Relief program has raised over $150 million for the WFP and other hunger relief organizations, breaking their annual donation record every year. Every one-dollar that’s donated provides four meals for hungry children at school.

In 2012, the World Hunger Relief provided 132 million meals in more than 45 countries. This was attributed to the record-breaking $33 million raised by the program.
The World Hunger Relief takes advantage of Yum! Brands Inc.’s huge employee base that enlists friends and family to volunteer for hunger relief efforts. Together, they have logged millions of volunteer hours in communities around the world.

The aid provided to emergency operations conducted by the WFP has helped thousands of men, women, and children. Other achievements of the World Hunger Relief include:

• Directed $1.5 million to relief funds in the Philippines after Typhoon Haiyan

• Providing assistance so that a school feeding program in Ethiopia, reaching 438,000 primary school age children, can continue for one year

• Provided 132,000 people affected by floods with fortified meals for one month

• After a major earthquake in Peru, 80,000 survivors were provided with rice for one month

• Following Cyclone Sidr, victims in Bangladesh were provided with fortified meals for one month