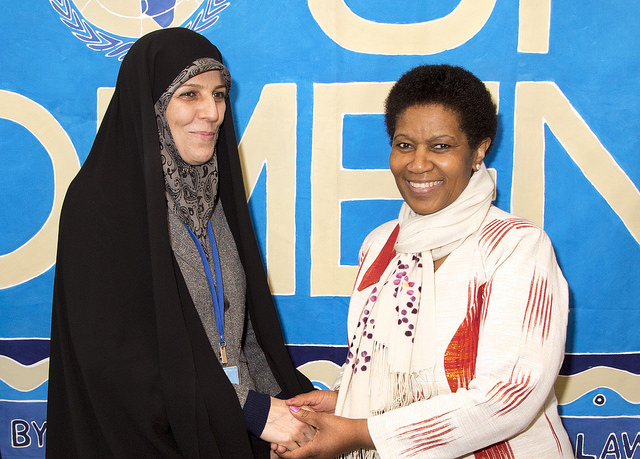 Iran has made notable progress in women’s education and health, including an increased ratio of literate women and girls. Women make up more than half of all university students, as reflected in the 2009 Gender Development Index of 0.770. The Iranian Parliament has adopted “The Charter on Women’s Rights and Responsibilities”, which emphasizes the use of social insurance to provide support to female-headed households and bring about women’s empowerment in Iran.

Unfortunately, the participation of women in the community and social development programs is very low. Women lack any social decision-making power and suffer from low confidence and self-esteem. Iran has not yet acceded to the Convention on the Elimination of All Forms of Discrimination Against Women due to opposition from its Guardian Council, who believe that the convention is incompatible with sharia law.

Women’s empowerment in Iran does not have much-needed support from its government, and social barriers continue to restrict women at every step. This is lack of support is partly due to the political ideology that demands women do not stray from their roles as mothers and wives.

Iranian law considers the husband as the head of the household with complete control over his wife’s choices. For example, a husband can prevent his wife from working (some employers even ask for the husband’s written consent) and can even forbid her from traveling abroad and from obtaining a passport. Women’s rights are obstructed to the point that they are not allowed to watch men’s sports in stadiums. An Iranian woman can even be killed by her husband for adultery, according to Iranian law.

Women are not allowed to hold leadership offices like the Presidency or the Supreme Leadership. In fact, according to the 2010 Freedom House report, current laws are more conservative and discriminating than customary practices.

Under the Gender Inequality Index, empowerment is measured by the share of parliamentary seats held by women and by attainment of primary and secondary education by each gender, whereas economic activity is measured by labor market participation. Women’s empowerment in Iran can thus be understood by looking at simple statistics. Only 3.1 percent of women hold seats in Parliament and only 66 percent have gone through secondary education. As for economic activity, female participation in the labor market is a meager 16.2 percent.

UNDP, along with the government of Iran, introduced the Carbon Sequestration Project to help achieve women’s empowerment in Iran. Thanks to the project, women are able to showcase their work and talents, which include handicrafts and traditional culinary skills, at exhibitions.

Education is a vital part of women’s empowerment in Iran, which the government has recognized. To continue what it has started, changes need to happen on a cultural level, including the elimination of gender stereotypes in textbooks and seeking men’s participation in protecting women’s rights. Continued work can ensure that all women have the opportunity to reach their full potential.