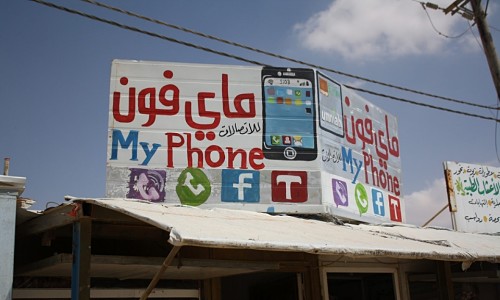 In Zaatari, a refugee camp located in a desolate area of the northern Jordan desert, Syrian refugees live in a grid of makeshift tents very similar to the other nearly 1 million Syrians who have set up camp throughout Jordan in the past year.

In stark contrast to surrounding refugee camps in the Jordan Valley, such as the neighboring Azraq camp, however, there is one thing which has served to set Zaatari apart: the Internet.

Zaatari, which is home to 100,000 Syrians, started out as a temporary residence in which residents lived in deplorable conditions and frequently complained about the high rate of crime. In the past year, however, the camp has developed into Jordan’s fourth-largest ‘city,’ which boasts an enviable main street by refugee camp standards and is nicknamed the Champs Elysees. The Champs Elysees, which, unlike the rest of Zaatari, has paved roads and functioning street lamps, is also home to a growing number of bootleg charging stations, where customers can pay to refuel their computers and phones with electricity stolen from the camp’s grid. An increasing number of Zaatari residents have begun to tap into the camp’s Internet, using the Wi-Fi in order to stay in touch with family members spread throughout the region, tap into social media, keep up with world news and news about the countries they fled (via trustworthy sources such as the BBC World Service), and even learn English.

The recent influx of Internet users in Zaatari comes despite the fact that the Wi-Fi connection is incredibly clogged, thanks to the influx of thousands of refugees in recent months, which has put a strain on the region’s already slow electricity grid. Refugees hoping to use the Internet for a variety of purposes have to wait hours while a site buffers, even if they upload it in the middle of the night, according to Talash, one of the camp’s electronics vendors.

The success of the Internet and its ability to brighten the lives of Zaatari residents have inspired the United Nations and internet and communications technology (ICT) experts to explore the idea of making Wi-Fi free, and thus widely accessible, to refugees who have been displaced since the crisis in Syria began: a number which currently stands at 4 million.

According to the U.N., free Wi-Fi could bring educational, personal, and career benefits. Syrian refugees in Jordan, for example, who are prohibited from working by Jordanian law, can use the internet in order to tap into a ‘global marketplace.’ Young Syrian children who have suffered from a lack of educational opportunities in the refugee camps are also able to use the Internet to access free classes, thereby helping to circumvent the possibility that the recent crisis has created a Syrian ‘lost generation.’ Free Wi-Fi also offers the added benefit of enabling humanitarian organizations to communicate directly with residents and dispel rumors in the camp, such as the rumor which circulated last year that refugees were all going to be relocated to the less desirable and incredibly remote Azraq refugee camp.

U.N. and ICT officials have acknowledged that installing free Wi-Fi in Zaatari would be a difficult task, especially given the fact that refugee camps hosting Syrian refugees already bear the burden of frequent funding cuts. However, there is precedent for the use of free Wi-Fi accessible to refugees. The U.N. refugee agency’s (UNHCR) innovation team, for instance, recently released a mobile app for Syrian refugees living in Turkey, designed to explain refugees’ legal rights and point them to the nearest U.N. office. Recently, a highly successful app was also created by two Syrian refugees in Turkey for other refugees in the region. The app, which posts jobs that refugees are eligible for, gives them advice about landlords, explains mystifying rules about various camps and has already accrued 11,000 followers.

While U.N. officials consider the idea of installing free Wi-Fi, Zaatari residents have told reporters that they would be ecstatic if it were to come to fruition. Talash, the electronics vendor, told Al Jazeera, “life is comfortable enough here.” But with Internet access, Talash said his time at the camp would be much more tolerable.