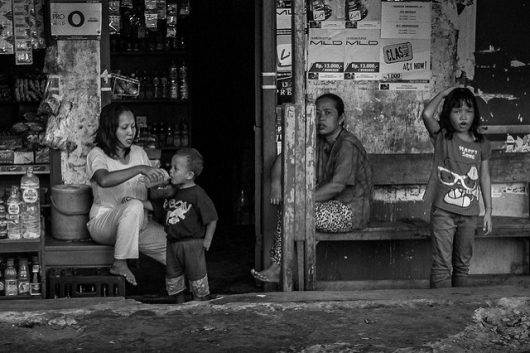 Indonesia is the largest country in Southeast Asia, both in terms of population and economy. In the past decade, Indonesia’s economy has steadily grown, with overall poverty falling by 6 percent from 2007-2014. Despite this, however, Indonesia still has 105 million people living just above the national poverty line.

So, with a steady economic growth and a labour force of 126 million people in 2016, why is Indonesia poor?

Firstly, in terms of geography, Indonesia is vulnerable to a wide variety of natural disasters, such as volcanic eruptions, earthquakes and tsunamis. In 2004, a deadly magnitude 9.1 earthquake struck in the Indian Ocean near Indonesia, claiming 230,000 lives and displacing tens of thousands more. Communities such as Banda Aceh also suffered massive, long-term environmental and infrastructural damage, leading to a widespread emergency situation in the region. In asking the question “why is Indonesia poor?”, events like this may serve as one of the most directly contributing factors.

Furthermore, the employment growth has fallen behind the population growth rate, leaving many young, able-bodied workers without jobs. With approximately 1.7 million people entering the labor force each year, Indonesia’s job market must continue growing in order to meet this demand.

Despite these facts regarding the recent and current trends in Indonesia’s poverty outlook, there is a high amount of optimism for the future. The country’s president, Joko Widodo, has announced a firm commitment to improving national infrastructure, and has approved $353 billion to fund infrastructure development until 2019. This plan includes the Kalimantan region, which has historically been overlooked in Indonesia’s development strategies.

Furthermore, the United Nations, World Bank, OECD, and International Monetary Fund have all forecast positive GDP growth rates in Indonesia since approximately 2014, likely as a direct result of rising fuel and mineral prices around the globe. The proper utilization of this positive forecast and optimistic outlook by the Widodo presidency, through the continued dedication to infrastructure improvement, can allow for Indonesia’s people to flourish for years to come.

Why is Botswana Poor? The Problem of Insecticide Resistance in Anopheles Mosquitoes
Scroll to top