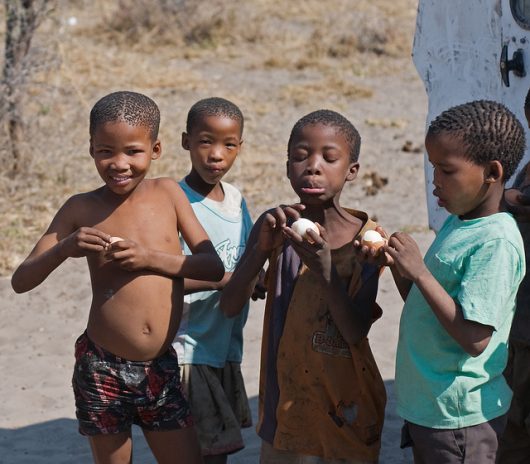 Botswana, located directly north of South Africa, is slightly smaller in size than Texas and has a population size of about 2.2 million. From 1867 to 1966, Botswana was under the rule of Great Britain, which limited its economic growth, as Britain used Botswana for its benefit. Nowadays, though, why is Botswana poor?

After achieving independence in 1966, Botswana saw its economy boom, in part due to the discovery of diamonds within its borders. Previously, Botswana had been one of the poorest countries in Africa, but it has continually grown economically, with an average GDP growth rate of 5 percent per annum in the last ten years.

Although Botswana has vastly improved since gaining independence, as is additionally supported by its dropped poverty rate from 50 percent in 1966 to 19 percent today, poverty is still a significant problem within Botswana. Focusing on rural areas where poverty is most present, one can find answers to the question “why is Botswana poor?”

The diamond industry accounts for 85 percent of Botswana’s export earnings. Dependency on diamonds, a luxury item, causes Botswana to be very vulnerable to economic downturns in developed countries, such as the 2008 recession. Economic growth has risen and fallen multiple times since the 2008 recession – most recently it grew 2.6 percent in 2016.

The diamond industry cannot support all of Botswana’s people, however, especially as it is mostly mechanized and therefore does not create a vast amount of jobs. Many Batswana survive through the agricultural industry, which is also unstable due to chronic droughts plaguing Botswana.

Why is Botswana poor? The years of 2015-2016 saw the worst drought to hit Botswana in 34 years. Many groundwater sources went dry, and dams fell to below 20 percent of their capacity. Unstable agricultural conditions in a country where nearly half (48.5 percent) of land is for agricultural use, contribute to poverty.

Another major reason why Botswana is poor is the intensity of HIV/AIDS within its borders. Although Botswana no longer ranks as the country with the highest rate of HIV/AIDS infection in the world, it is third-highest, with an adult prevalence rate of 21.9 percent. The HIV/AIDS epidemic is hugely detrimental to society and the economy.

A high prevalence of HIV/AIDS creates a diminished workforce and poses problems for employers that need to provide healthcare and death benefits. It also increases the gap between wealthy and poor within Botswana, as more affluent individuals and families are better equipped to pay for health expenditures and financially cope with the loss of a family member than an impoverished family.

Poverty Rate in Laos Falls as Economic Growth Increases Why is Indonesia Poor?
Scroll to top