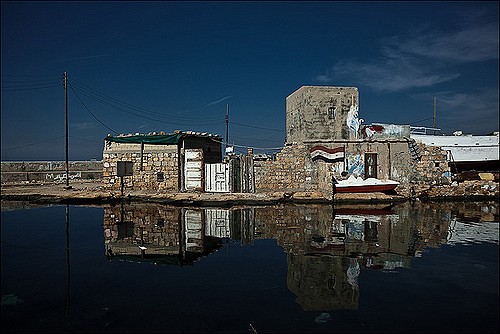 As the conflict in the country continues, water quality in Syria worsens, leaving the population more susceptible to diseases and forced to migrate in unsafe conditions.

Poor water quality in Syria is caused by damage and lack of maintenance to infrastructure as well as poor sanitation. Low power supply and lack of sewage sanitation also contribute to an insufficient clean water supply.

Water is also used as a weapon. For example, in Aleppo, pumps and electricity stations that fuel the water are controlled by different fighting parties. The water supply is often deliberately turned off for long periods of time as a tactic to wear the other side down.

As a result, civilians suffer and must resort to whatever supply of water they can find, such as wells, which are not guaranteed to be clean. Those who drink unsanitary water are at risk for developing diarrhea, typhoid, hepatitis and other health problems.

The Middle East has the lowest per capita water availability in the world as well as one of the highest rates of population growth, according to Ashok Swain, director of the International Center for Water Cooperation.

Syria and other nearby countries such as Iraq suffered a severe drought from 2007-2010, which severely lessened agricultural productivity and forced farmers and herders to migrate for water.

“The inability of Syria and Iraq to meet the demand for water — due to growing populations and/or decreasing supply and flawed water policies — has only exacerbated problems caused by drought conditions,” wrote Marcus King, associate professor of International Affairs at George Washington University, in his essay “The Weaponization of Water in Syria and Iraq.”

“Water scarcity played a meaningful but complicated role in creating conditions that led to political unrest and ultimately violent insurrection in Syria in spring 2011 and the spillover into Iraq,” said King.

According to the U.N. Refugee Agency, 6.5 million people have been displaced inside Syria, and 4.8 million have fled to nearby countries such as Jordan, Lebanon, Turkey, Iraq and Egypt since the conflict began in 2011. Neighboring countries are also experiencing clean water shortages as a result of the influx of refugees.

The U.N. Children’s Fund brings portable water to refugees in Syria and other affected nations as well as implements cost-effective, sustainable water systems for communities in need. UNICEF is also working to relieve nations hosting refugees by augmenting existing water, sewage and waste collection systems to accommodate the increased demand.

Other relief efforts headed by UNICEF include:

You can help Syrian refugees by making a tax-deductible donation to UNICEF.