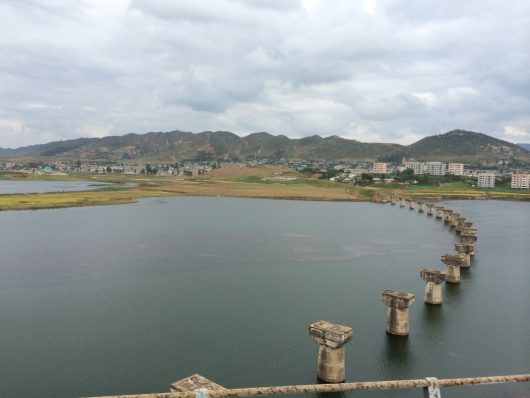 Located on the Korean peninsula, North Korea has been discreetly building up a nuclear arsenal while projecting its power to ensure that it is a force not to be reckoned with on the international stage. Despite such shows of power, it is known to be one of the largest food recipients in the world. More recently, it faces immense challenges as a result of ballistic missile tests that have been met with hard sanctions. Economically unbalanced and a grave threat to the international community, the hope of cooperation seems nonexistent. Kim Jong-un still has yet to respond to the country’s severe poverty situation, with about half of North Koreans living in poverty.

The Problem
Water quality in North Korea has been affected by a severe drought, forcing relief aid to step in and counter some of these issues. One observer had the opportunity to monitor the water quality in North Korea and witness the scarcity of access to clean water due to environmental degradation that has gravely affected the nation. Too often, the North Korean people are neglected and rarely humanized by news outlets, who tend to focus on the ominous threat that the country’s government presents.

This individual, who remained anonymous, observed the work of an international charity organization known as World Vision, an advocacy organization that works on development and humanitarian aid. During this visit to North Korea, the observer witnessed the lives of people in rural and urban areas, noting the environmental degradation that had taken place due to the effects of climate change, deforestation, soil erosion and water resource depletion.

In January, it was reported that “more than 50,000 hectares of farmland in North Korea’s granary zones have been damaged by drought.” According to the U.N. Office for the Coordination of Humanitarian Affairs (OCHA), a severe drought had plagued agricultural areas due to a 30-80 percent drop in precipitation in January. OCHA further cited that due to this drought, the effects were a deterioration in water quality in North Korea, causing a concern of waterborne diseases spreading among the population.

Initiatives
On a more positive note, according to a report by World Vision, there has been an increase in installations of wells, along with high-quality solar pumps, in order to pump water to water tanks on nearby hills. This action has led to substantial improvements in access to clean water for communities. Some of the most vulnerable who were lacking this inalienable right that a lot of us take for granted now have indoor plumbing, offering them clean sanitation. As the observer explained: “1,435 children will have easy access to clean water for the first time in their lives.”

Final Thoughts
With its relentless assault on freedom of expression and stifling of any political dissidents who may challenge the status quo, North Korea’s government remains a staunch opponent to any form of democracy. The average North Korean citizen only worries about their daily lives, which includes how to break out of poverty. North Koreans may be among the most difficult group of people in the world to help due to the restrictions imposed by their government, but taking simple steps to improve sanitation and water quality in North Korea can make a major improvement in their lives.