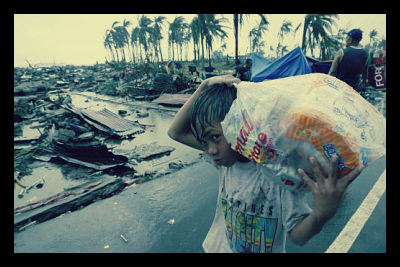 Located in the northwestern Pacific, comprised of more than 7,000 islands, the Philippines suffers more storms each year than any other nation in the world.

To date, Typhoon Haiyan is the most catastrophic natural disaster to strike the Philippines. More than 9.7 million people have been affected, with over 3 million of them being displaced due to the storm.

The death toll continues to rise, hitting 3,637 casualties. In a country where poverty and inequality remain a challenge, climatic disasters only thwart the growth of the economy and the citizens.

Typhoon Haiyan destroyed 384,000 acres of rice, corn, and other crops, totaling $105 million worth of damage. These crops are staples in the diets of Filipino culture and countries surrounding them; the damage  is a devastating blow.

With the recent FARM bill heavily under debate in the House and Senate, Congress is in a position to provide the U.S. international food aid program with the flexibility necessary to effectively respond to natural disasters.

Just days after Haiyan struck the Philippines, the USAID’s Office of Food for Peace devoted $7.75 million from the International Disaster Assistance account. These funds will be used to purchase foods for the Philippines and neighboring countries in need.

Currently, 1,100 tons of rice positioned in Sri Lanka are in transit to the distraught area, but are not expected to arrive until December 2. In addition, 55 tons of emergency food products were airlifted from the U.S. to provide aid.

The United States is the top respondent in the world to humanitarian crisis situations around the globe. America’s humanitarianism displays the desire to help others that runs true to core human values.

Yet with food aid come various restrictions that deter not only the process of giving assistance, but the steps to receiving it as well. Food aid restricts the U.S. to only being able to send nutrients that are grown on U.S. soil.

The commodities are then shipped across the ocean; had the U.S. sent rice rather than Sri Lanka, it may have taken 10-12 weeks to arrive. This timeline can be twice as damaging as the storms themselves, considering the starvation and hunger needs that take place immediately after a natural catastrophe.

The argument currently under scrutiny is that it would be much more beneficial to send money; a resource that can be received immediately with limited restrictions.

Although the United States was able to provide financial support, had Typhoon Haiyan taken place at any other time, assistance may not have been available. Due to stipulations on aid, the U.S. may have been limited on cash from responding to crises earlier in the fiscal year.

The U.S. government does not have the flexibility to purchase food resources in any market except its own – a crippling factor that prevents America from being able to reach its full potential of assistance.

Even with the support that has been provided, Typhoon Haiyan has emphasized major errors that exist within food aid. This past spring, President Obama proposed a total reform of food aid. This presidential bid would have forced Congress to consider food aid a foreign aid issue – separating food aid from domestic agricultural issues.

In turn, this would have removed the stipulations that currently surround food aid. President Obama’s proposal was rejected, however, and the FARM bill continues to be ironed out in a special committee in Congress.