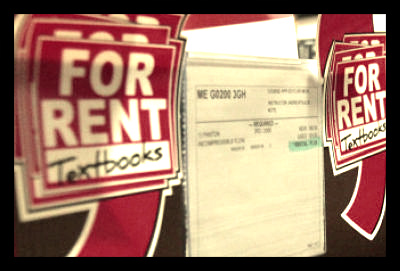 As any college student knows, each semester’s course load brings with it the dread of buying textbooks.  In recent years the stress of purchasing expensive books that might only be used in a single class has eased with the proliferation of rental and free online options.  Despite such developments, the cost still forces many students to take out separate loans just for the books.

The average post-secondary student spends about $1,200 per year on textbooks, up 812% in the past 30 years.  Not only has the cost per year skyrocketed but it has risen faster than tuition, health care costs and housing costs in the same amount of time.  Furthermore, each of those costs has increased faster than inflation.  With over 21 million people enrolled in post-secondary educational institutes, the amount spent in the U.S. on textbooks each year adds up to approximately $25.2 billion dollars.

Quite a lot could be purchased with $25.2 billion, particularly food, another college student focus.  In fact, the average person in the U.S. spends $2,273 on food each year, less than twice the expenditure on college textbooks.  In comparison, the average expenditure on food for someone in Venezuela is $1,378, in Vietnam is $345, and in Pakistan is $415.  The U.S. Department of Agriculture’s Economic Research Service compiled information on 91 countries, calculating expenditures based on locations (e.g. for home cooking or at restaurants), type of food (e.g. snack, meal, or alcoholic beverage), per capita expenditure, and food expenditure as a percentage of income.  It is important to note that all food expenditures quoted in this article exclude alcoholic beverages.

The findings demonstrate that generally, as countries develop the percentage of a person’s income spent on food decreases.  The U.S. is one of the highest spenders on food per person, but, of the countries surveyed, uses the lowest percentage on food: only 6.6%.  Meanwhile, Venezuela spends 18.6%, Vietnam spends 35.9%, and Pakistan spends 47.7% of expenditures on food.  For a visual representation, check out Washington State magazine’s compilation http://wsm.wsu.edu/researcher/WSMaug11_billions.pdf.

One way to compare textbook spending and food spending is through the basic amounts.  Each year the average U.S. college students spends almost the same amount on textbooks as a person in Venezuela does on food, 2.9 times more than a person in Pakistan and 3.4 times more than a person in Vietnam.  Another option is to compare book costs to the overall expenditures per person in each country.  The U.S. average per capita expenditure each year is $34,541, therefore student’s textbook purchases equal 3.4% of total expenses.  In comparison, U.S. textbooks would consume 16% of Venezuelan expenditures, 124% of Vietnamese expenditures, and 137% of Pakistani expenditures.

The $25.2 billion textbook expenditure each year in the U.S. could easily cover the WFP’s projected $3.2 billion necessary to reach the 66 million hungry children in school via school meals programs started by WFP.  Thirty-eight countries have taken over WFP-founded school meals programs, using them as incentives for children to attend school as well as for clear nutritional benefits.  Another WFP program provides cash or vouchers to those who lack financial access to food.  In 2011 there were 51 cash and voucher projects across the globe distributing the equivalent of $208 million.  The $25.2 billion in textbook spending would provide 121 times more cash and vouchers.

With more alternatives to regular, new textbooks becoming available, the question arises, where will that $25.2 billion be spent instead?  It would certainly make a dent in the problem of global hunger and malnutrition.  Though not calculated in this article, the money could be used to better transport food to areas with insufficient access, or towards more efficient and sustainable agricultural practices: twenty-five billion dollars has quite a bit of spending power.