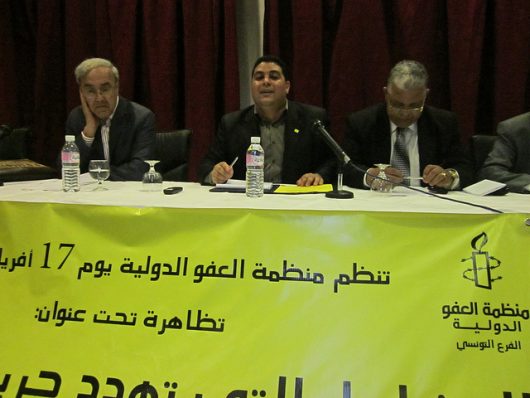 In 2011, Tunisia was embroiled in revolution, eventually leading to the resignation of President Zine El Abidine Ben Ali and the formation of a new, free, republic. Although Tunisia’s new government may be free, there is no guarantee that it will have a stellar human rights record. Following the revolution, Tunisia’s human rights record has been imperfect, and its new government still has issues to work out.

According to Amnesty International’s annual report, the biggest threat to human rights in Tunisia is the current nationwide state of emergency, which has been in effect since November 2015. Through this state of emergency, the government military force has been granted an expansion of powers in order to deal with the threat of the Islamic State along Tunisia’s borders. Instead, the military has used its power to take away the human rights and freedom of Tunisian citizens. Tunisia’s Truth and Dignity Commission, which was created to address Tunisia’s human rights violations, reported that it has received reports of more than 62,000 human rights violations.

Among said human rights violations include arbitrary arrests, intimidation and harassment, discrimination and the banning of assembly and free speech. Since the start of the state of emergency, there have been thousands of arrests and house searches, often without a warrant. Accompanying these arrests is a sense of intimidation and harassment, where law enforcement and military officials are threatening people in the name of counter-terrorism. Tunisian citizens are stereotyped, men in long beards and women in religious clothing are explicitly monitored and treated harshly and their homes are searched. These unlawful searches and arrests go against key human rights, including the right to work and freedom of movement – further injuring Tunisia’s human rights record.

The Human Rights Watch notes that Tunisia has been trying to prevent torture and ill treatment towards detainees in their prisons, with the National Constituent Assembly creating a High Authority for the Prevention of Torture, which elected 16 members in March 2016. Using unannounced inspections, torture in prisons and detention sites can be reduced. However, the Tunisian government is still unsure of how to preserve the human rights of citizens in police custody as reports of ill treatment by judges and police officers rise.

Addressing these reports, the U.N. Committee on Economic, Social and Cultural Rights recommended, among other suggestions, that Tunisia should increase accountability amongst these police officers and judges by raising awareness of human rights. Thus, while the government continues to stabilize and search for ways to stem Tunisia’s human rights violations in the midst of the country’s ongoing state of emergency, there is hope that the treatment of its citizens will continue to improve.