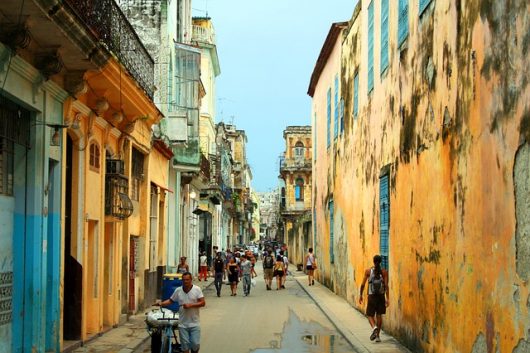 The global financial crisis hurt first world nations as well as developing countries. As one example of this, poverty in Cuba has been affected. The country is doing better than some Latin American countries, but the government is struggling to maintain services such as free healthcare and education.

Cuba opened up its economy as a result of the global financial crisis, but it is worse off as a result. Fifteen percent of the population is living in poverty in Cuba. This most recent data is at least 10 years old, though, and more recent numbers are not available.

Because of the USSR’s collapse, Cuba was left to fend for itself. This has led to a restructuring of how goods and services are distributed. For example, instead of a universal food supply in the form of food stamps for everyone, Cuba is targeting the most vulnerable.

One problem Cuba faces is people living longer, despite the availability of junk food. It is estimated that the population of those over 65 in Cuba will double in the next 20 years. That will swell the number of people seeking healthcare as well as the costs associated as such.

About 40 percent of Cubans fall within the “middle class,” which is broadly defined, according to the Brookings Institute, but the average take-home pay for Cubans is $20 per month, or $0.66 per day, based on a 30-day month.

Despite this, 90 percent of Cubans own their own homes. Most Cubans can buy and sell property, open small businesses, have cell phones and form cooperatives both on and off farms.” President Raul Castro, who encourages the high ownership rate, is trying to “preserve socialism while introducing new market-based mechanisms,” according to Ted Piccone, a senior fellow at the Brooking Institute who specializes in International Order and Strategy and Latin American Initiatives.

Just as towns that concentrate and depend on one industry or business, with the risk of seeing that business close or fail, Cuba replaced dependence on the United States with dependence on the former USSR, only to see it fall. Castro inherited a Cuba that was dependent on sugar production, but with the deep socio-economic and racial scars of slavery. Some believe the revolution interrupted capitalistic growth, while others say it was “a precondition to resolving the contradictions obstructing development by ending Cuba’s subjugation to the needs of U.S. capitalism.”

Adding to the problem was Batista’s taking millions with him as he fled. This left Cuba without much of the money it needed to rebuild.

Despite the country’s economic problems, prices are kept low across the board, with some services still coming free, such as education and healthcare. Those who rent do not pay more than four percent of their income.  Cuba’s infant mortality rate is 4.5 per 1,000 live births, placing it among the rates in first-world countries, even ranking above the United States. The wealth indicators here are not necessarily material goods but instead are reflected in the quality of life. This quality does come at a price, though: Cuba’s infrastructure is in very poor shape.

Despite Cuba’s economic problems, its medical triumphs show how, despite the embargo by the United States, a country can survive if it looks for help elsewhere, and even become a leader. By investing in people and reaching out, poverty in Cuba and other countries like it can be reduced, and developing nations can make their mark on the world and life for its citizens better as time goes on.