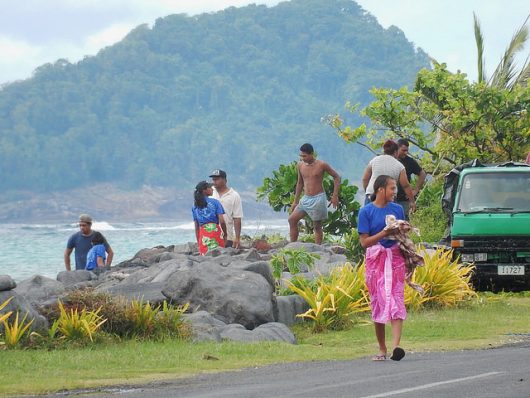 Samoa is one of the most stable islands in the Pacific region, with a reasonably healthy economy and an average family that lands in the lower-middle income category. As a developing nation, it has made many impressive strides toward meeting the Millenium Development Goals.

Extreme poverty is very uncommon in Samoa. However, around 20 percent of Samoans do live under the national poverty line. The causes of poverty in Samoa ultimately boil down to lack of access to education, youth unemployment and underemployment, gender inequity and threats to natural resources and farming land like natural disasters.

The gap between education in rural and urban areas is staggering, with few schools in the countryside and a lack of updated curriculum and textbooks in many areas. Many rural children will go into agricultural jobs too early, jobs which ultimately are not sufficient enough to support families later on. This working out of necessity instead of continuing with education furthers the cycle of poverty in rural areas of Samoa.

There is a noticeable lack of opportunity and social benefits in rural areas that disadvantage the growing youth community in Samoa, especially as the youth population increases and puts pressure on existing resources. There is also a disparity between men and women in Samoa, with many jobs especially in agriculture restricting women. This disparity results in a significant difference between male and female incomes in the country, contributing to family poverty.

Increasing natural disasters such as cyclones threaten marine and agricultural resources, causing communities to take a long time to recover from the devastation they inflict. While Samoa’s soil is fertile, it is very shallow and prone to erosion. These features are only intensified by rising temperatures and population increases, causing land degradation and shortages of resources.

Most Samoans rely on agriculture for their income, so any threat affects their livelihoods. There is an immediate need for the implementation of sustainable farming, fishing and logging practices in Samoa to prevent environmental degradation and preserve Samoa’s natural resources.

Overall, Samoa is a moderately productive and stable country in the context of the Pacific region. However, more work can be done to ensure that the next generation of youth is employed and has the same natural resources at their disposal as their ancestors did.

Hopefully, with the implementation of sustainable agricultural practices, these changes are made, and Samoans can expand from agriculture into manufacturing to continue working towards achieving its Millenium Development Goals.