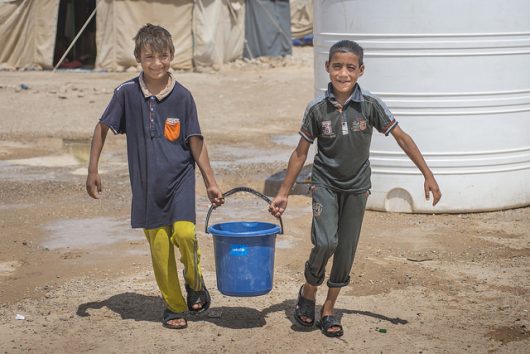 Decades of war, along with the refugee crisis created conditions where some of the top diseases in Iraq have become prevalent. They include the infectious diseases of cholera, tuberculosis and leishmaniasis. Sanctions in the 1990s devastated the economy, and Iraq has been unable to improve conditions as a result. The pronounced lack of public infrastructure, medical resources and an inability to continue research exacerbate infection rates. While the destruction of war dismantled these, the poverty of Iraq has clear, yet unexpected, connections with these three issues.

People contract cholera by drinking water or eating food contaminated by the bacterium Vibrio cholera. The disease can cause severe diarrhea, which may lead to death. Without clean drinking water and sewage removal, Iraqis can infect their communities, causing an outbreak of the disease. Additionally, the housing in refugee camps is often crowded and does not have proper water and sanitation facilities.

A parasitic disease called leishmaniasis transmits to humans through certain insects and animals typically found in poor living conditions. Humans can also spread the disease. Poor waste management attracts flies and rats. As a result, the infected animals are lured within close proximity to Iraqis, causing many to become infected. Inadequate housing and sanitation in Iraq provide the bacteria ample opportunities to increase infections through human-to-human contact.

Adequate housing, access to clean water and proper sewage disposal systems all cost money. Building and maintaining such infrastructure is challenging in lower-middle-income countries such as Iraq. The World Health Organization (WHO) states that a long-term investment in infrastructure is ultimately needed to fight cholera. Improved waste management and sanitation systems would also reduce the spread of leishmaniasis.

2. An Inability to Fund Medical Surveillance is Detrimental to Disease Control

The World Health Organization reports the financial crisis in Iraq is crippling the country’s disease surveillance. As a result, reports of the actual number of infected people may not be accurate.

Disease surveillance involves finding infected people, diagnosing them and keeping records of their disease and treatment course. It’s important to reducing transmission of leishmaniasis, cholera and tuberculosis. By diagnosing patients quickly, they are less likely to spread the disease. It also ensures patients are receiving proper treatment.

Tuberculosis is a lung infection that spreads through the air. Disease surveillance is most important in containing tuberculosis outbreaks. Treatment for the infection can require up to six months of antibiotics and careful monitoring. Improper use of antibiotics causes the bacteria to resist medications, resulting in a more difficult treatment plan. Resistant forms of tuberculosis require more expensive antibiotics, which can cost 10 times more than simpler antibiotics. More expensive drugs are a clear burden on any healthcare system.

The WHO has funded the training of several healthcare professionals to treat and monitor cholera outbreaks. Meanwhile, there may not be enough surveillance of cholera, and the disease rate is likely greater than reported. Iraq also does not have enough medical centers to diagnose leishmaniasis. A large grant, governed by the United Nations Development Programme greatly improved Iraq’s tuberculosis crisis, however, these improvements are threatened by Iraq’s financial crisis.

As of 2013, Iraq spent 3.3 percent of its gross domestic product (GDP) on healthcare. While this is slightly more than others in the Arab world, it is lower than the six percent world average spent on healthcare. As the conflict and humanitarian crises persist, the healthcare budget decreases, requiring continued funding from non-Iraqi government sources. If foreign aid does not continue funding health surveillance, current disease outbreaks may become worse.

In 2013, the WHO started the EWARNS system. This program monitors disease throughout Iraq, trains health professions in diagnosing conditions and improves laboratory capabilities. Initially, there were only five disease reporting centers, now there are over 180.

3. Research is an Important Piece in Healthcare but Low in Financial Priority

Treating disease outbreaks requires an evaluation of current practices and research into new treatments. Furthermore, some of the top diseases in Iraq, such as leishmaniasis, need further research to discover vaccines and better diagnostic methods. The majority of Iraq’s healthcare budget goes to daily medical expenses, like salaries, not research.

Outside funding helps research continue and reduces disease outbreaks. A portion of WHO’s tactic to treat cholera outbreaks at the worldwide level is research prevention and control of the infection. WHO is also researching treatment and control of leishmaniasis. After seven years of funding, the United Nations Development Programme brought the tuberculosis outbreak under control. This grant paid for many aspects of treating the disease, including research on its epidemiology and determining successful standard operating procedures.

The connection between poverty and healthcare in a country has many dimensions, especially in Iraq. War, social instability, education and the economy all impact disease progression and access to treatment. These do not negate the power of poverty’s impact on top diseases in Iraq.

Developed nations suffer many of the same diseases as impoverished nations. Poverty-related diseases are often treatable, and yet kill millions of people every year. This fact alone demands the need for further poverty-reducing measures.