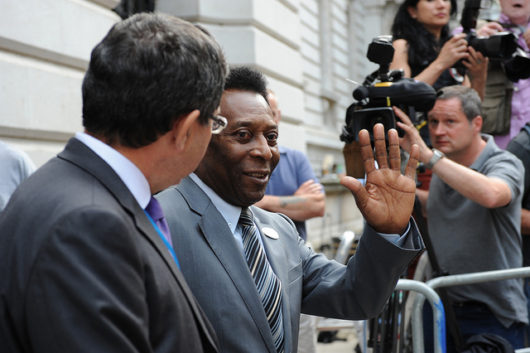 Edson Arantes do Nascimento, known widely by the moniker Pelé, is arguably the most popular Brazilian football player and had led his team to trebled triumph in the World Cup. But Pelé doesn’t have a one-track mind: he has one leg in the sports pool and the other leg in the social activism pool.

Previously, Pelé worked with FIFA as an ambassador against racism as well as with UNICEF to advocate children’s rights. He has moved on to inaugurating his own organization called The Pelé Foundation to empower impoverished, disenfranchised children around the world.

When first announcing the launch of his foundation Pelé said, “In 2018, I am launching The Pelé Foundation, a new charitable endeavor that will benefit organizations around the world and their dedicated efforts to empower children, specifically around poverty and education.”

Having grown up poor, Pelé developed an affinity for charity work. In the past, he had supported a multitude of different organizations including 46664, ABC Trust, FC Harlem, Great Ormond Street Hospital, Prince’s Rainforests Project and The Littlest Lamb.

In the future, Pelé’s organization plans to expand and cover issues such as gender equality and will eventually birth offshoot programs, not unlike other organizations of its nature.

Pelé isn’t alone in this endeavor. During the initial announcement, Pelé blazoned that he would be partnering with both charity:water and Pencils of Promise to fulfill his goals.

Founded in October 2008, Pencils of Promise (PoP) is a nonprofit dedicated to improving the state of education for children in Nicaragua, Guatemala, Ghana and Laos. Besides improving the quality of education, PoP also constructs schools and educational facilities, trains faculty, champions scholarships and supports sanitary programs. Backed by big names such as Justin Bieber and Scooter Braun, PoP is a big name itself in the humanitarian space.

Established in 2006 and having funded 24,537 different projects, charity:water is spearheaded by Scott Harrison. charity: water gives all donations to projects working to end the current water crises. Harrison said, “We’re excited to partner with The Pelé Foundation to bring clean water to thousands of people in the years to come. Having access to clean water not only saves hours of wasted time, but it also provides safety, health and hygiene. It directly impacts the future of children, and we believe it’s the first step out of poverty for rural communities all over the world.”

Top 10 Facts About Girls’ Education in Cote d’Ivoire Similarities and Differences Between Charities, Nonprofit Organizations and...
Scroll to top