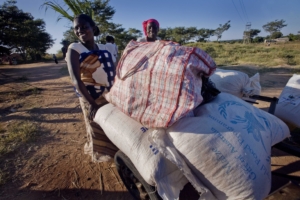 In recent decades there has been a debate regarding the importance of foreign aid in sub-Saharan Africa. Some have argued that foreign aid is not beneficial to developing countries, as it creates a dependence upon aid, rather than fostering growth. Empirical data does not support this view, which reveals that while there is much work necessary in developing countries, foreign aid has stimulated economic growth and positive results in the battle against poverty. The amount the United States spends on foreign aid represents a minuscule fraction of the federal budget, despite compelling evidence that foreign aid is mutually beneficial, serving the interests of the United States and other modern countries, as well as those of developing nations. One cannot overstate the importance of foreign aid in sub-Saharan Africa, and if anything, countries could benefit others by stepping it up.

Foreign aid is useful for fostering economic development in impoverished nations. In 2015, a study that the University of Western Australia conducted concluded that foreign aid had a significant and long-term positive impact on GDP growth in the 25 countries it examined. It also found that economic growth in sub-Saharan Africa directly correlated with the increase in foreign aid from 1970 to 2012. Additionally, countries that received the largest amount of foreign aid also displayed the greatest amount of economic growth.

Foreign aid is also crucial for providing humanitarian aid and ameliorating suffering. In sub-Saharan Africa, the focus of foreign aid is often to reduce poverty and provide food. A 10-year case study that the Global Development Network conducted showed that Overseas Development Assistance (ODA) in Kenya had positive results on poverty reduction in the country between 1999 and 2009. The Global Development Network also found that foreign aid most largely benefits the poorest of the poor, who are most desperately in need of humanitarian aid.