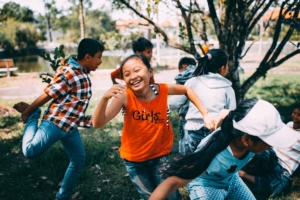 For over a decade, UNICEF has hosted its annual Soccer Aid, a charity soccer match featuring both professional and celebrity players to raise money for keeping kids around the world happy, healthy and safe. This year, the match was held in London on June 16, and raised a record-breaking £6,774,764 ($8,577,528.70 USD) in one night alone and £1,000,000 more than last year. The UK public, ITV and STV users all contributed, and the UK government matched each donation up to £3,000,000 to defend play for every child.

The money raised from the match will support the work of UNICEF to ensure that over 80,000 children in Sierra Leone and Zambia can have a childhood of play. The funding will help to provide lifesaving food, vaccinations, clean water, support for caring for mothers and babies and protect children from violence, exploitation, and abuse.

Sierra Leone’s under-five mortality rate is in the 2nd percentile, having one of the highest infant mortality rates in the world. The many causes of death in children are preventable. Most deaths are due to nutritional deficiencies, pneumonia, diarrhoeal diseases, anemia, malaria, tuberculosis, and HIV/AIDS. Some of the attributable factors include limited access to safe drinking water and adequate sanitation, poor feeding and hygienic practices, and limited access to quality health services.

Zambia is a country with many adolescents. 53 percent of the population is under 18 years old, and many of these children–45.4 percent–are affected by extreme poverty. Almost 65 percent of children in rural Zambia are affected by three or more deprivations: access to nutrition, education, health, water sanitation, adequate housing, and physical and emotional abuse. While the infant mortality rate improved by 37 percent between 2007 and 2014, it is still in the 25th percentile. However, with the help of UNICEF Soccer Aid, these conditions can be improved.

UNICEF has worked in 190 countries and territories over 70 years to fight for the lives of children around the world. Through their projects, including child protection and inclusion, child survival, education, emergency relief, gender discrimination, innovation, supply and logistics, and research and analysis, the organization saves the lives of nearly 3,000,000 each year.

UNICEF believes in the power of play and the joy of a carefree childhood. However, millions of children around the world are unable to be included in this objective due to disease, conflict, hunger and poverty.
Through play, children are able to learn how to interact with their peers and learn abstract concepts. Just 15 minutes of play can spark thousands of connections in a baby’s brain, and playing before they enter school has an impact on how they will perform.

Over the last 13 years, UNICEF Soccer Aid has been able to change the lives of children by helping them reach their full potential. By bringing people together to watch a match and encourage donations, they are able to change lives in many in parts of the world.