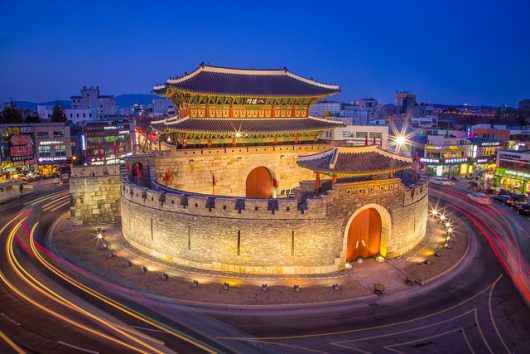 South Korea, a country which used to rely heavily on foreign aid, is now giving its own. The increasing prominence of South Korean foreign aid is proof that the impact of U.S. foreign aid extends well beyond the period during which it gives.

On July 5, 2016, South Korea’s Ministry of Foreign Affairs greenlighted $21 million in projects aimed at helping refugees in Africa and improving health care across the continent. The money will come from a 1,000 won ($0.87) solidarity tax on airline tickets for outbound international flights.

The air ticket levy is not the only source of funding for South Korean foreign aid. According to the Australian Institute of International Affairs, the country has donated a total of $1.8 billion in official development assistance (ODA) as of 2016, equivalent to 0.14 percent of its gross national income.

South Korea kicked off its donations with a $25 million contribution in 1987, the same year it became a democracy. In 2010, only 23 years after it became a donor, the country became a member of the Development Assistance Committee (DAC) of the Organization for Economic Co-operation and Development (OECD). It remains the only country on the DAC that had been a recipient of development assistance.

It is hard to imagine that South Korea, which is now the world’s 11th largest economy and leads the globe in innovation, was at one time among the world’s poorest countries.

In 1960, the country’s per capita income stood at $70. Adjusted for purchasing power parity, South Korea’s GDP per capita in 1960 was still a dismal $1,420. In fact, according to a case study by the Embassy of the United States in Seoul, it was only ahead of one-third of the countries in sub-Saharan Africa.

South Korea started receiving U.S. foreign assistance in 1952, which was meant to assist the war-torn country on the path to recovery. It was entirely dependent on the United States for food supplies in the following ten years, and USAID missions continued through the 1970s.

The recent increase in South Korean foreign aid is proof of the lasting impact of U.S. development assistance. An initial injection of foreign aid in a country will multiply itself down the line as that country develops and becomes self-sufficient.

When John F. Kennedy became president in 1961, he specifically called for “aid to end aid” and to “help people help themselves” concerning South Korea. More than fifty years later, South Korea not only no longer requires assistance from the U.S. but is now making its mark as a donor of foreign aid.

Voice of Wisdom: The Elders Speak Up About El Niño Education in Botswana: Overcoming a Resource Curse
Scroll to top