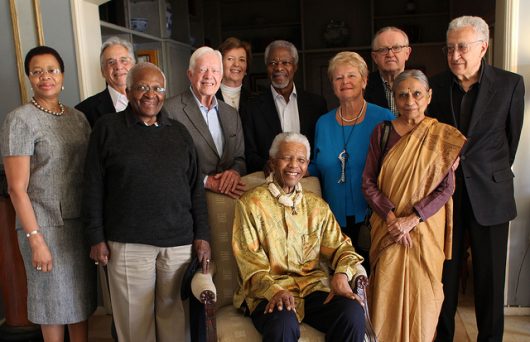 In response to the El Niño weather phenomenon, The Elders have asked that world leaders take initiative in filling the $2.5 billion gap in funding. This funding is necessary to alleviate the global effects of El Niño on poorer communities.

The Elders and Their Cause

The Elders are a group of activists and advocates brought together by Nelson Mandela in 2007. They work together, using their influence and experience, to promote human rights, peace and justice on a global scale. Their attention has turned toward the problem of human-induced climate change due to the effects of the El Niño weather event. This year brought the strongest El Niño yet, which led to numerous droughts and severe flooding in many areas.

While the weather pattern itself is over for the year, the aftermath is still very much present and widespread. A lack of water in many areas caused extensive crop loss and increased food prices. Food shortages are running rampant in eastern and southern Africa as over 26 million children lack food security and one million suffer from severe malnutrition. Food shortages, however, are not the only concern. El Niño also warms bodies of water, which in turn contributes to the spread of the Zika virus, a virus transmitted by the Aedes aegypti mosquito.

All of the issues associated with El Niño could lead to mass migration as communities are forced out of their regions by uninhabitable weather and poor health conditions.

The Elders have recommended two steps that governments can take to aid victims of El Niño. The first step is to financially assist governments of climate-vulnerable countries by developing contingency plans and creating safety measures in the event of another climate-related crisis. The second step is to create and agree upon a “concrete road map” at the United Nations Climate Conference. This road map will hopefully lead to funding the $100 billion annual commitment to climate action in developing countries by the year 2020.

Kofi Annan, chair of The Elders, addressed the most recent El Niño event in a letter to all world leaders. “I am confident that your country will play its part in ensuring that the world’s most vulnerable people are protected now and into the future,” said Annan.

This sentiment reverberates to those struggling through El Niño’s devastation and serves as a reminder that global solutions require global support.