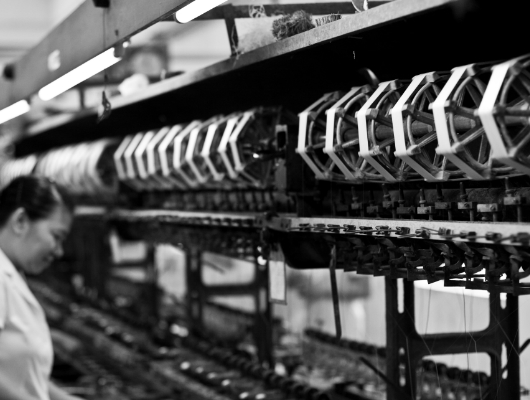 Silk has always been a highly coveted material. While silk production is said to have begun in China several thousand years ago, the vibrant and expensive material also has a long history in India. Today, silk production may represent a pathway out of poverty for India’s rural poor.

In the eastern state of Bihar, India, women like Munia Murmu are expanding their economic opportunities by farming silkworms and producing silk. Like much of rural India, Murmu lived in extreme poverty until she started raising the worms.

She belongs to a tribal community, generically referred to as an Adivasi, who suffer some of the worst scores on most development indicators such as income, life expectancy and health in India.

Fortunately, silkworm rearing and silk production, also known as sericulture, allow these rural, tribal communities to lift themselves out of poverty.

A local NGO called Pradan (short for Professional Assistance for Development Action) provides livelihoods and training to these communities, teaching them advanced techniques to efficiently rear and sell silkworms and silk.

This is especially attractive for rice farmers in the state of Bihar and nearby Jharkhand, who do not have irrigated crops and must depend on unreliable monsoon rains. Sericulture provides a much-needed buffer against the uncertainty of growing traditional crops but probably doesn’t represent a stable year-round source of income itself.

Demand for silk is enormous in India alone, which is the world’s largest consumer of silk as well as the second largest producer after China. Silk products are also highly valued in western markets like the U.S. and Europe, making sericulture a very lucrative option for farmers like Murmu who are subject to seasonal uncertainty.

During silkworm breeding season, lasting three months per year, Murmu earns about $770, an amount that clearly goes a long way in improving her quality of life. A global annual demand of 1500 tons of raw silk also eliminates any worries about overproduction. As long as rural villagers are willing to raise silkworms, they will be able to find a market for their products.

Though silkworm production isn’t a new phenomenon in eastern India, Murmu and her tribal community have managed to increase yields from the techniques introduced to them from Pradan. For example, the NGO showed her community how to inspect eggs for disease using microscopes, as well as how to plant trees that host worms and moths.

Pradan has also provided instruction in the rearing of higher-value varieties of silkworms, such as Tasar, which is particularly productive in the large forests of Bihar. These developments have allowed villagers to maximize their profits by using only the most productive worms.

Thankful for the extra income they provide, Murmu simply says, “Silkworms have changed our lives,” pointing out her newly-built house, water pump and indoor plumbing. With proper training, rural farmers in other parts of India could also supplement their income and potentially grow out of extreme poverty.

Like what the ancient philosopher Maimonides said about teaching a man to fish, teaching the rural poor how to raise silkworms can help them support themselves and their communities in a generational, inexpensive and sustainable manner.