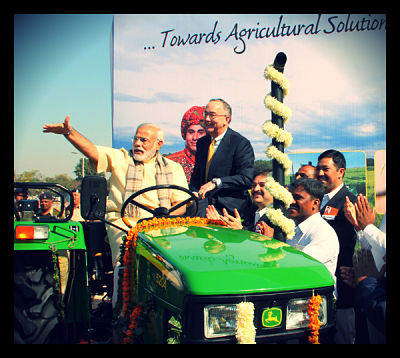 For India, the issue of food security has been a chronic blight that has plagued the 1 billion strong nation ever since its beginnings. Recently, the government has launched a comprehensive program aimed at alleviating the widespread malnutrition and low birth weights of many infants and children. In a bold move to add even more momentum and resources toward the fight against food insecurity, the Department of Agriculture has launched the Second Green Revolution in India.

The Second Green Revolution in India was celebrated during the farming festival of Uzhavar Thiruvizha, which will last until May 20th. During the festival, organized by the Department of Agriculture and Ministers from varying levels of Indian Government, farmers were invited to take part in educational seminars covering issues such as water usage, soil testing, and pest control. In addition to the educational aspects of the Uzavar Thiruvizha, 114 farmers also received financial assistance and farming assets valued at 72.42 lakhs.

In regards to the overall goals of the Second Green Revolution in India, Joint Director of Agriculture Mohammed Kalimullah Sherif remarked that “Under the ‘Second Green Revolution’ underway in the State, it has been planned to double the crop production and increase the revenue of farmers threefold over a period of three years ending 2015.”

Government investments such as the Uzhavar Thiruvizha highlight the ongoing commitment of the Indian government in tackling future food security challenges and alleviating chronic malnutrition. Furthermore, through the coordinated efforts of the Second Green Revolution in India, the mission of doubling current agricultural outputs is a goal that has never been more attainable.