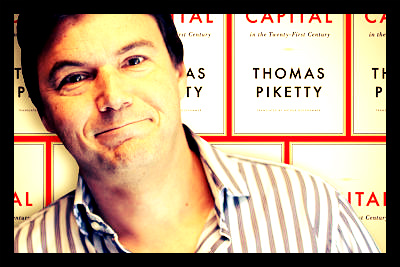 Everywhere one looks in the news media, the word inequality is beamed into television sets, either through the banter between detached pundits or through the bullhorns of activists storming littered streets.

Brought to the forefront of policy debates after the full force of the Great Recession was being felt, the rising, global inequality between the rich and the poor has stoked the powerful emotions of the disenfranchised.

And now, a French professor, Thomas Piketty, is ratcheting up the debate even further with a massive tome designed to showcase just how vast the gulf between rich and poor has become.

The book is called “Capital in the 21st Century” and in it Piketty attempts to address the reasons behind the trend of rising inequality throughout the world during the past decade.

And people’s ears are perking up; the book reached number one on Amazon.com shortly after its release.

Oxfam recently released a report detailing the harm global inequality is inflicting on the lives of the poor, as well as its effect on governance. Oxfam notes that 85 people in the world collectively own the same amount of wealth as the bottom half of the world’s population.

They note that stocks and corporate profits are continuously climbing, while wages have stagnated. And one of the most prominent concerns among the public is the over-representation of the wealthy’s concerns in governments around the world.

But has there been no progress? Has the state of those inhabiting the poorer regions of the world not changed at all? In reality, many things have changed for the better in the past several decades.

Between 1981 and 2008, the amount of people living on one dollar a day fell by 750 million. That is astronomical progress, but if one looks between countries rather than within, the inequality gap is as big as ever.

So what can be done? Many people have lost faith due to a perceived shift in political power away from the average voter and toward the wealthy and politically connected. Despite voters heading to the polls again and again, politicians routinely implement policies that do nothing to truly address rising inequality.

This happens despite the fact that most people agree great inequality is undesirable; most view its alleviation as a good thing, so long as the policies are sensible and do not harm the overall economy.

Many individuals complain of vast oligarchies setting policy against the average man, but fail to show up at the voting booth (a problem in America especially).

It’s more important to show support for policies and politicians that will actually implement effective and sensible policies to reduce inequality than to simply bemoan the current state of affairs.

Policies such as the expansion of the Earned Income Tax Credit in the United States, and increasing social spending in poor countries to actually reach those in need are just a couple things that can alleviate inequality.

The policies are there. It is simply up to the public to remain informed and active within their respective societies.