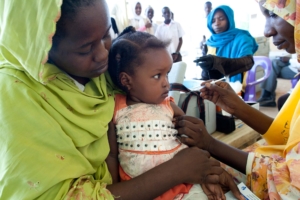 For many people around the world, the COVID-19 pandemic was an eye-opening event that revealed the dangers and inadequacies of the world’s global health systems. However, for other people, outbreaks of epidemic diseases might be more of a lived reality. On the continent of Africa, many know a certain geographic region in sub-Saharan Africa as the “meningitis belt.” These 26 countries face the dangers of meningitis more than other places around the world, and the outbreak of the COVID-19 pandemic delayed the vaccination of the MenAfriVac meningitis vaccine to 50 million children in these countries. African governments collaborated with the World Health Organization (WHO), the Bill and Melinda Gates Foundation and PATH, a nonprofit health organization, to develop the MenAfriVac vaccine and distribute it to more than 350 million people living in areas of high risk. While this scientific effort made an incredible difference in public health in Africa, the COVID-19 pandemic largely disrupted the processes that allowed these successes to continue. The pandemic reduced services aimed at preventing meningitis by 50% from 2019 to 2020. Despite recent setbacks, WHO developed a plan to address meningitis.

At the end of 2021, the Democratic Republic of Congo (DRC) reported 2,662 cases of meningitis along with 205 deaths due to meningitis. Local mobile clinics and vaccination drives from WHO helped reduce the outcome of death from 85% of cases to 10% of cases fairly quickly.

WHO assists with suppressing the outbreaks of meningitis such as in the case of the Democratic Republic of Congo in late 2021; however, it also develops long-term plans to improve public health in Africa overall. In November 2020, the World Health Assembly approved the Defeating Meningitis by 2030 roadmap. WHO will implement the $1.5 billion plan in January 2023, which will begin the fight to control meningitis in Africa by 2030. The plan includes a goal to achieve a 90% vaccination rate using a new vaccine that will hopefully protect communities against new outbreaks of the disease. From 2023 to 2030, the plan also hopes to reduce deaths of meningitis by 70% and reduce cases of meningitis by 50%. Several steps to achieving these goals include increased disease surveillance to catch meningitis early and increasing awareness of services to improve overall public health in Africa.

With WHO’s plan to defeat meningitis by 2030, public health in Africa will greatly improve the lives of millions of people within the meningitis belt. Meningitis is mostly a preventable disease with the efforts of vaccinations and other measures of public health. As the rest of the world encountered during the COVID-19 pandemic, collaboration within a community goes a long way to keeping everyone safe.