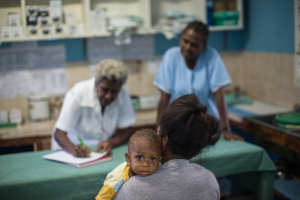 Vanuatu is composed of 83 islands and relies on agriculture. Due to the separation of islands, health in the Pacific Islands, including Vanuatu, is often inadequate. Access to health care remains a challenge to many residents, and there also exists a lack of resources and medical personnel. Though there are six hospitals located throughout the country, many people must rely on health centers due to the rural areas in which they live. The recent success story of the elimination of trachoma follows another success back in 2016 when the country eliminated lymphatic filariasis, a disease that affects the lymphatic system.

The bacterium, Chlamydia trachomatis, causes trachoma, which leads to a visual impairment that is, at times, severe enough to cause the patient to become blind. The bacterium has caused visual impairments in about 1.9 million people in the world so far, and 136 million people remain at risk of contracting the disease as of June 2021. The disease spreads through contact with discharge coming from the eyes or nose, whether through direct contact or intermediates such as flies. Trachoma is classified as a neglected tropical disease (NTDs).

People often find these diseases in countries in Africa, Asia and Latin America. Though there are many NTDs, trachoma is one of the known diseases in this category that can be eliminated from a population through the use of public health measures. Improvements to hygiene and access to clean water help control the spread of the disease, as well as control the spread of possible vectors such as flies. The push to eliminate trachoma began after data from 2014 indicated that trachoma infected 12% of children between the ages of one and nine years old. This means these children were at risk for serious visual impairment that would affect their future. Trachoma also holds a significant economic impact on countries that trachoma impacts, where these countries may lose up to $5.3 billion per year.

A Path Toward Elimination

Other countries can follow the success of Vanuatu by abiding by the recommendations of the World Health Organization (WHO) and mobilizing medical professionals and communities in places of at-risk individuals. The acronym for the policy toward eliminating trachoma is SAFE. It stands for “Surgery for trichiasis; Antibiotics to clear infection; and Facial cleanliness and Environmental improvement to limit transmission.” Communities pair this process with education on avoiding health risks, proper treatment and providing antibiotics to populations, especially rural individuals. Governments, such as the case in Vanuatu, also often partner with international organizations such as WHO, and with organizations that specifically work with treating diseases related to blindness such as the Fred Hollows Foundation.

The Fred Hollows Foundation is particularly important to the regions in and around Australia because it focuses on diseases related to sight. It helps to reduce poverty by providing medical treatments, education and training. It builds health facilities and works with local communities to end preventable blindness.