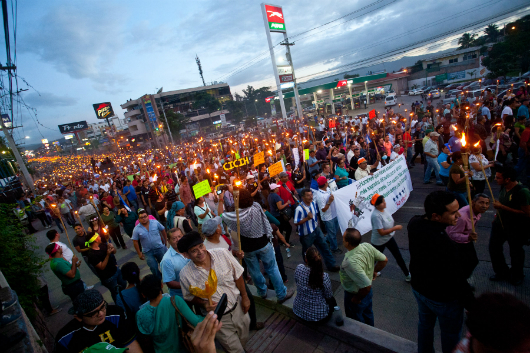 For the fifth consecutive Friday, thousands of protesters in the Honduran Capital have marched, torches in hand, calling for their President and other leaders to resign on charges of corruption. In fact, their demands go beyond what many see as simply political theater in having high ranking officials resign. The protesters are seeking systemic change by having an international observing and prosecuting body investigate and fight corruption and impunity in the struggling Central American Nation.

The CICIG’s recently renewed mandate to operate in Guatemala was welcomed by the State Department and presented as an effective model for curbing violence, unlocking growth and reducing poverty in the Northern Triangle countries of Guatemala, El Salvador and Honduras, in an earlier Borgen Blog post.

The grievances behind the recent protests in Honduras serve as a great example of how corruption undermines growth. An estimated $120 million was “fraudulently misspent” by the Honduran Social Security Institute, a large proportion of which went to fund President Juan Orlando Hernandéz’s 2013 campaign. Mismanagement of public funds, not to mention poor investment climates and the struggles of doing business, are some ways in which corruption impedes poverty reduction. In 2005, corruption was estimated to cost the world $1 trillion.

Leading the world in murders per capita, and Latin America in income inequality, life is difficult in Honduras.

At least 32.6 percent of Hondurans live in extreme poverty, reports the World Bank, and the the number of people below the national poverty line continues to climb. Rocked by a drug war, hyperactive and omnipresent gang activity and intense violence from law enforcement, the symptoms of corrupt and unstable institutions consistently make headlines in what The Economist warned was fast becoming a “failed state.”

The issues facing Honduras are not entirely endogenous and are incredibly complex. For starters, their geographic location is favored by narco-traffickers aiming to get products to markets in the U.S. They are still reeling from a 2009 coup. Impunity among state security forces is rampant, something that has been blamed for their out of control killings and targeted assassinations.

Among the many things that Honduras needs, are dependable and capable institutions, which are difficult to cultivate in the environment in which Honduras finds itself. Thankfully, the unique model provided by the work of CICIG in Guatemala lends itself perfectly to their situation, and the people of Honduras are ready for it.