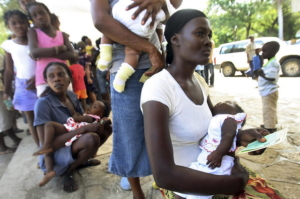 According to UNICEF, some of the main causes of death in Haiti are diarrhea, respiratory infections, tuberculosis, HIV/AIDS and malaria. Among the Caribbean Islands and Central American countries, Haiti has the highest number of malaria cases. Malaria is a major public health concern, but there are efforts and progress to reduce cases of malaria in Haiti.

Malaria is a life-threatening disease that spreads by a female mosquito carrying a fatal parasite. In 2014, The Service de Suivi et d’Evaluation of the Programme National de Controle de la Malaria (PNCM) reported 17,094 cases of malaria. Five percent of children under the age of 5 who contract the disease receive treatment. The 2010 earthquake, the most destructive earthquake in Haitian history, destroyed health care and laboratory facilities. Therefore, the earthquake raised complications to eliminate malaria. According to the Malaria Journal, infections are the cause and result of poverty in Haiti.

In the past 10 years, Hispaniola has made efforts to eradicate malaria. In the Dominican Republic, reports state that cases of malaria reached a 15 year low. Nonetheless, one-third of the cases of malaria came straight from Haiti. Therefore, controlling malaria in Haiti will prevent it from spreading to other areas.

Malaria Zero is a group of organizations working together to eliminate malaria by 2020. In this organization, partners work on running operational research and locating areas of high transmission and risk. The organization has refined malaria surveillance systems to track every malaria case, make sure all malaria cases receive a diagnosis, limit the ability of mosquitoes to transfer the disease and educate and mobilize people to get tests and treatment.

In addition, over 130 community members walked several miles across rocky land to offer anti-malaria medication to more than 36,000 people.

Nothing but Nets is a worldwide campaign that raises awareness and funds to fight malaria. This organization raises funds to distribute insecticidal bed nets that protect families from malaria-carrying mosquitos as they sleep. In addition, the organization also offers household spraying, malaria treatment and training of health care workers.

Overall, eliminating malaria will help improve Haiti’s health system, stimulate financial growth and increase economic levels for people living on the island. Organizations and political leaders must focus on tackling the issue to completely get rid of the disease. Many Haitians still battle the illness, but the progress in reducing malaria in Haiti means hope for the future.