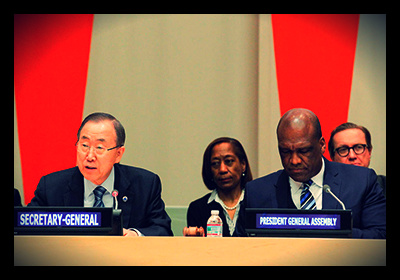 In a recent address, UN Secretary-General Ban Ki-moon and General Assembly President John Ashe stated that a framework of accountability is essential in the development of post-2015 goals and their success. President Ashe expressed that such a mechanism “must be inclusive, transparent and based on mutual respect; it must promote mutual learning; it will need to contain feedback and/or inputs from the national to the regional and global levels; and it must fully utilize the new potential of data and technology.”

Secretary-General Ban Ki-moon also recognized the possibility of failure if a system of accountability is not put into place, or if it is not implemented properly. “Any framework for accountability must apply to all, taking into account their different capacities and responsibilities. Accountability mechanisms and platforms should be nimble and decentralized.”

Established by the UN in 2000, the Millennium Development Goals were an attempt to increase development and meet the needs of a global community. The goals include:

6. Combating diseases such as HIV/AIDS and malaria

8. Establishing a global partnership for development

The target date for the completion of these goals was set for 2015, and with less than two years left until the deadline, the UN and other global partners have begun discussing a post-2015 development agenda.

The Secretary General also stated in a report that four fundamentals must form the foundation of the post-2015 agenda: a far-reaching vision of the future firmly anchored in human rights and universally accepted values and principles, a set of concise goals and targets aimed at realizing the priorities of the agenda, a global partnership for development to mobilize means of implementation and a participatory monitoring framework for tracking progress and mutual accountability mechanisms for all stakeholders.

UNESCO released a document summarizing their own concerns of the future of the Education for All (EFA) goals after 2015. Their stated “thematic priorities” include:

1. Establishing early childhood care and education as the foundation of learning

3. Recognizing the central role of teachers for delivering quality education

4. Increasing emphasis on skills for life and for work

5. Strengthening of education for sustainable development and global citizenship

In their statement on the operationalization of a post-2015 agenda, UNESCO also recognized the need for an accountability framework that is flexible enough to account for different educational priorities across countries and adapt to changing global situations.

As development of the agenda has progressed, it has become clear that the intention is not to abandon the Millennium goals in favor of more easily attainable markers, but to continue their pursuit through more effective means.