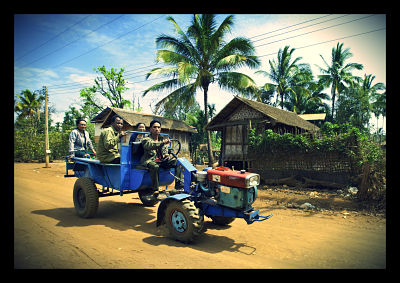 This is the seventh post in a series focusing on the UN’s Millennium Development Goals. The MDGs are a set of eight interconnected goals based on a commitment to improving the social, political, and economic lives of all people. They were agreed upon by over 180 countries and are to be achieved by 2015. With two years left until this deadline, it is exciting to see how much progress has been made and important to recognize how much work we have left.

The seventh MDG consists of four facets that aim to ensure environmental sustainability. Progress pertaining to the four individual goals has been uneven, with incredible achievements in some areas and stagnation in others. The four targets are:

Overall progress on the first of these goals has been slow. Deforestation continues to deplete an important safety net for the poor, especially in South America and Africa. With over 32 million acres of forest lost annually, the world is headed for environmental devastation and efforts on this front must be redoubled. Similarly, global CO2 emissions have risen by almost 50% since 1990. On the other hand, since the Montreal Protocol on Substances that Deplete the Ozone Layer in 1987, the consumption of such substances has decreased by over 98%. Applying this type of initiative to CO2 emissions, deforestation, and other harmful developments would vastly improve the state of the world. The potential for this type of action exists, as displayed at the Rio+20 United Nations Conference on Sustainable Development in June 2012, where world leaders pledged more than $513 billion towards sustainable development projects.

Progress in regards to the second goal has been slightly more substantial, with the number of protected areas on Earth’s surface increasing by 58% since 1990. However, there are still many vital biodiversity sites that are not yet protected. As of 2010, only 1.6% of the total ocean area is protected, compared with 12.7% of land area. The world’s oceans are a vastly undervalued resource. They are critical environmental resources and are damaged at alarming rates. Offenses in this area include overfishing, destruction of coral reefs, loss of biodiversity, and water pollution. Protection of oceans is vital to the welfare of many countries whose economies rely on ocean-related industries such as fishing and tourism. Efforts to ensure the preservation of oceans and land areas are needed to counteract biodiversity loss and environmental destruction.

When it comes to the third facet of MDG 7, progress has been incredible. The proportion of people without sustainable access to safe drinking water was cut in half five years ahead of schedule! Over 2 billion people gained access to improved drinking water sources between 1990 and 2010. The World Health Organization and UNICEF define “improved” sources of drinking water as those that are protected from outside contamination, including human and animal waste, and runoff water. The percentage of people using such a source increased from 76% to 89% between 1990 and 2010. This amazing progress should leave no doubt that we can provide improved water sources for the 768 million people who are still in need, 40% of whom live in sub-Saharan Africa.

The final target of MDG 7 has also been met far ahead of the 2020 goal date. The lives of at least 200 million slum dwellers have been changed with access to improved water and/or sanitation facilities, as well as sturdier and less crowded housing. Living space is defined as a “slum household” if it lacks one or more of the following:

Of the five criteria, the security of tenure is by far the most difficult to keep track of. Because of this, the first four standards are widely used to determine the number of people living in slums. Based on these measures, more than 850 million people were living in slums as of 2012, which represents an increase of more than 200 million people from the 1990 figure. However, it is also worth noting that the proportion of slum-dwellers living in the developing world decreased by 6% between 2000 and 2012. This reflects the progress there that has led to the incredible achievement of this facet of MDG 7 so far ahead of schedule.

Environmental stewardship is an essential part of the fight against poverty. Those living in poverty are often the hardest hit when the environment is not taken care of. They do not, for example, have the resources to buy fertilizer to supplement deteriorating soil or to support themselves through a severe drought. They have less access to safe drinking water and sanitation facilities, and their housing is often tenuous. The seventh MDG is important because it aims to ensure that all people are able to benefit from the world’s resources for many generations to come.