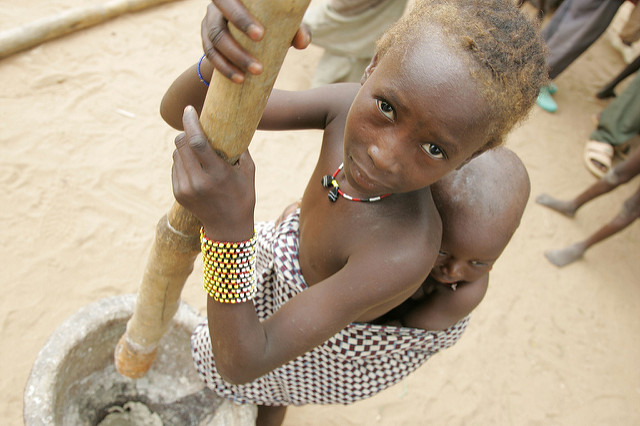 There are three reputable institutions that measure GDP per capita: The International Monetary Fund, The Central Intelligence Agency and The World Bank. The conclusions these organizations find are similar. A deviation that exists is which one takes Purchasing Power Parity (PPP) into account, as this is a measure of GDP per capita that takes costs of living and inflation rates into consideration.

Since the creation of South Sudan, a Central-Eastern landlocked country,  in 2011, its GDP per capita has been on a non-linear decline. What largely accounts for this trend is an ongoing civil war which started in 2013.

As a result of this civil war, millions have been declared displaced and as refugees, and famine has ravished several parts of the country. Also, on top of this, both sides of the civil war have both committed a wide range of human rights violations on the citizens of South Sudan.

The conditions of civil war set the stage for poverty. Eighty percent of people living in Sudan are defined as “income poor” and live on less than $1 a day. Eighty-five percent of the population is engaged in non-wage work and one third of the population does not have access to a secure amount of food.

Eritrea is a very small country in Africa. Despite being the 9th poorest country in the world, the nation has made vast improvements. GDP per capita in 1992 was under $800, and is now $1400. This is still a staggeringly low GDP per capita for a country that has a population of a little over 5 million people.

The cause of such severe poverty is multifaceted. Environmentally, Eritrea has always faced droughts, and with 80 percent of the population engaged in subsistence agriculture, this makes for very low productivity of food for 80 percent of the people living in Eritrea. There is also a general lack of financial resources in Eritrea, thus leading to a lack of large private enterprises and a very low industrial production growth rate of 5.4 percent.

The government of Eritrea is very unhelpful here, too, as they have been preoccupied with military spending and attempting to figure out how to obtain a coherent policy of a national hard currency.

The South-Eastern African Country Mozambique has always had a low GDP per capita. Even when it gained independence in 1975, the nation was considered one of the world’s poorest countries. Since its independence, socialist policies and general economic mismanagement have further impoverished the country. Nearly 50 percent of Mozambique’s population lives in poverty.

This has been exacerbated by lack of effort and results in poverty reduction, and slow economic growth of which does not benefit all Mozambique citizens equally, keeping the poor, poor. Potential for improvement in Mozambique is in agriculture, as most of Mozambique’s population works in this field. Also, innovations in tech and other lacking inputs would greatly benefit these workers.

Forty percent of what constitutes Niger’s GDP is agriculture. Agriculture also provides 80 percent of Niger’s population livelihood. Like all of the countries on this list, Niger’s poverty is accounted for by various factors: increase in population, lack of food security and low levels of educational quality.

Another large sector of Niger’s economy is uranium. This sector has been interrupted in recent years by terrorist activity that has also increased Niger’s government expenditure on security. These issues increased Niger’s reliance on foreign aid as a result.

It is also the case that families in Niger are large (6 per household on average), so what constitutes 80 percent of the livelihood of Niger across generations must be distributed between more and more people. The GDP per capita in Niger is on the rise, but ongoing conflict and rapid population growth makes the economic situation in Niger a difficult hurdle to overcome.

Malawi is a landlocked African country that depends heavily on external donors for subpar economic stability. In fact, GDP per capita growth has decreased in Malawi since 1961. Given that Malawi’s domestic economy is dependent upon primarily rain-requiring agricultural, and the geography of Malawi is prone to droughts this makes sense.

Climate change and growing population rates threaten to exacerbate this problem which has caused an increase in food shortages in recent years. However, government corruption is incredibly common in Malawi, which has very frequently led donors to withdraw funds. Amidst the turmoil, child and maternal health have made large strides in improvement. This is due to increases in prenatal care, vaccinations and skilled birth assistance.

Somalia is in the middle of this list because the data on their economy is very vague. The GDP per capita is $500 without PPP according to the World Bank. What is known about Somalia is that there is a perverse lack of educational opportunities (less than half of Somali children are in school) and job opportunities (paired with strict-conservative religious influence in Somali culture inclines younger people to turn to extremist groups).

With a rapidly growing population, improvements in recent years are mainly in infrastructure — something which Somalia lacked prior to the 1991 collapse of central authority. Such improvements are peculiar to Mogadishu, Somalia’s capital, an indication that rural areas are still in need of improvement.

A large role in how Liberia became such a poor country has been civil war and economic mismanagement by the Liberian government. Post-civil war Liberia (2010-13) seemed to be making an economic comeback, until the 2014 Ebola outbreak which put Liberia back several years. Export prices have yet to return to pre-ebola levels.

Liberia suffers from one of the world’s worst maternal mortality rates (7th in the world) and female death rates are amongst the highest in the world due to a high frequency of female genital mutilation (this effects two-thirds of Liberian women/girls.) According to CIA data, “Significant progress has been made in preventing child deaths, despite a lack of health care workers and infrastructure. Infant and child mortality have dropped nearly 70 percent since 1990; the annual reduction rate of about 5.4 percent is the highest in Africa.”

It is difficult to measure how improvements are occuring due to obscure data which is accounted for the majority of the DPC’s economy occurring outside of formal/traditional economic sectors (black markets).

In the past 27 years, the GDP per capita in Burundi has changed very little. Burundi, a landlocked African nation, has very little in terms of quality natural resources and manufacturing. Ninety percent of its population is in agriculture, which makes up 40 percent of its GDP.

Almost half of Burundi’s income is derived from foreign aid and the majority of the rest is dependent upon coffee and tea exports. Production of these goods relies on weather and global coffee and tea prices, which are not constant variables.

Burundi suffers from massive food shortages and lack of clean water, which has resulted in a 60 percent child malnutrition rate. The government has established Vision 2025 in cooperation with the United Nations Development Programme and the African Future Institute as it seeks to reduce poverty to 33 percent by 2025.

Schools are closed. There is also an ongoing refugee crisis inside and out (mostly to Chad) due to the ongoing conflict which started in the 2012 coup. CAR has one of the most unequal wealth distributions in the world on top of a lacking economy. This is due to various geographical and agricultural reasons, poor economic management, an unskilled workforc  and a poor transportation system that hinders trade.

Aid For The Poorest Countries in the World

Some of the conflict is also over “blood” diamonds. Efforts are being made to make said diamonds no longer of value, by lifting bans on their exports, as a means to reduce conflict and ultimately reduce poverty, by increasing government revenue.

It is clear that all of the poorest countries in the world list are in dire need of help, especially from the international community. Budget cuts threaten current national levels of foreign aid, and this is why supporting efforts like The Borgen Project is important. This organization amongst others actively opposes such budget cuts by calling, emailing and lobbying congress to oppose them. With support like this, powerful change can happen in the ten poorest countries in the world.