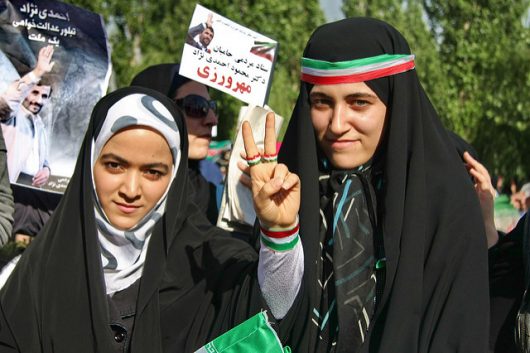 On May 19th this year, Iranians held presidential and local elections in their country. This particular election saw an increase in registered women candidates, along with the number of elected women officials, bringing hope and giving voice to women in Iran at both the national and local level.

In some parts of the country, there was a 34 percent decrease in the number of women elected compared to 2013; however, although the number decreased in 16 provincial capitals, 3 remained the same, while 11, including Tehran, saw increases in women being elected to councils. Iran’s Sistan-Balochistan province—an underdeveloped and impoverished area in the southeast of Iran with the highest percentage of illiterate girls and women in the country—saw a total of 415 women elected to office. In a village called Afzalabad located in the province’s Khash district, all of the 10 elected candidates were women.

Some of the concerns that women in Iran campaigned on included women’s civic engagement, citizens’ rights, employment, education, health and social security and welfare.

Recently, Iran’s newly reelected president Hassan Rouhani has been under pressure to appoint female ministers to his cabinet. During his last term, his all-male list of ministers disappointed his followers, even though he appointed a number of women to vice-president positions. Despite this, Shahindokht Molaverdi, Rouhani’s vice-president for women and family affairs, has won support among women’s rights advocates in Iran.

Ghonchech Ghavami, a leading women’s rights activist based out of Tehran, has said that “this structure has eliminated women on the excuse of meritocracy and experience but it looks like that main criteria for them is being male. That’s why appointing female ministers is symbolically important and would send a powerful signal in a country where politics still originates from men.”

One may find it surprising, though, that Iran as a whole has near-universal female literacy: women make up the majority (60 percent) of university students, as well as the majority of graduates earning degrees in science (68 percent). Furthermore, women in Iran are consistently outperforming their male counterparts.

Workplace biases in general are very much alive for women in Iran, and these biases often compel employers to hire male workers that are of identical or even lesser qualifications than their female counterparts. Although women in Iran have been as whole increasing their political participation within their government, they clearly still have a long way to go before achieving true gender equality.