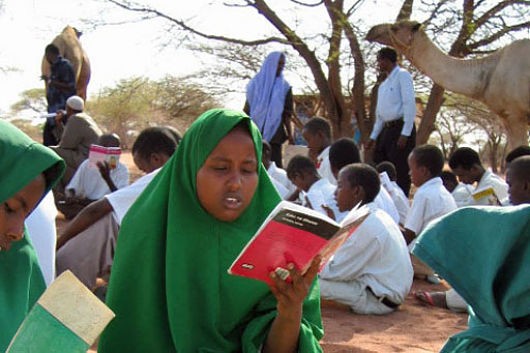 Although Kenya’s education system has improved over the past decade, many students are still left behind. One million Kenyan children are currently out of school, and while that number has steadily decreased in recent years, it still places Kenya at ninth in the world for out of school children. Even if a child does complete primary school, the quality of education is often insufficient for retaining necessary skills, a glaring flaw best illustrated with the statistics surrounding illiteracy in Kenya. Among men ages 15 to 29 who have completed six years of primary school, 6 percent are illiterate and another 26 percent are only semi-literate. For women of the same age group with the same level of education, the problem is even worse: 9 percent are illiterate, and 30 percent are semi-literate.

Marginalized children, particularly poor girls from rural areas, have still not benefited from improvements in Kenya’s school system. For example, almost all children from wealthy families in the capital, Nairobi, attend school, but in the North East region, only 55 percent of poor girls and 43 percent of poor boys attend school. This is partly due to the fact that the indirect cost of secondary education typically exceeds the monthly income of many families in rural areas.

Adeso, a Nairobi based development charity, is currently working to bring education to those who may have never had the chance to set foot in a classroom. The organization focuses on the idea that in order to improve the quality of life across Africa, development must come primarily from within Africa. Adeso works on development in four main areas. They aim to educate young people and equip them with necessary life skills, provide humanitarian aid where people lack food security, water, and sanitation, strengthen local economies, and influence local and international government policies.

Adeso runs a mobile school program in rural areas of Kenya that brings learning to nomadic students, usually girls, whose families have to relocate frequently in order to survive. They plan the school calendar around the weather patterns. Most formal learning is scheduled for rainy seasons when children do not have to balance labor demands and are more likely to stay in one place. The schools will travel with students as far as possible to allow them to continue their education.

The mobile school program was launched in February 2014, but funds are expected to run out by 2016. Adeso hopes to continue the program, but faces many obstacles, from political insecurity to poor infrastructure, to a pervasive belief in many areas that girls should not be educated. Adeso is still working towards securing more funding in order to extend the program. However, should the mobile schools close, the organization hopes that students have benefited from further education and can pass on what they have learned to their communities.