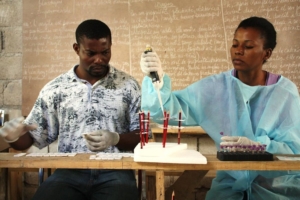 In October 2021, the World Health Organization (WHO) recommended a vaccine for the prevention of malaria. This malaria vaccine, called the RTS,S, is the first and only the WHO has recommended for malaria prevention.

Malaria has a devastating impact on countries where the disease is common. In 2020, there were 241 million malaria cases and 627,000 malaria deaths. In Africa, where 82% of malaria cases occur, 80% of malaria deaths consist of children under 5. In addition to the high death toll, malaria causes an estimated loss of $12 billion every year in lost productivity.

Over the past several decades, improved preventative measures including mosquito nets, antimalarial medications and efforts to reduce mosquito habitats have helped to contribute to a decline in the prevalence of malaria. Since 2015, however, progress in efforts to combat malaria has slowed, according to WHO. Some countries with especially high malaria transmission rates have even experienced an increase in malaria cases. After a slump in progress in recent years, though, the success of the RTS,S vaccine offers a ray of hope.

Due to the complexity of the parasite that causes malaria, this vaccine took more than 30 years to develop. Research on the RTS,S vaccine began in the 1990s with the first clinical trial on it published in 1997. However, several more decades of trials would pass before researchers proved the vaccine to be safe and effective against malaria in children.

Trials completed in 2015, which followed a schedule of three or four vaccines for children between 5 and 17 months of age, found the RTS,S vaccine to reduce malaria-related hospitalization by 37% in the first four years of vaccination.

Over the course of three years, the pilot program, which included trials in Ghana, Kenya and Malawi vaccinated more than 900,000 children. The pilot program confirmed that the vaccine, while not perfect, reduces the frequency of severe malaria infection and demonstrated that large-scale vaccine distribution is feasible, according to WHO.

Based on the findings of the trials, the WHO expects that vaccinating one child could save the lives of 200 of them, according to its report. The WHO estimates that, if widespread vaccination is achieved, the RTS,S vaccine could save the lives of 40,000 to 80,000 children every year. Following the success of the pilot program, the WHO officially recommended the use of the vaccine for areas with high to moderate malaria transmission in October 2021.

In April 2022, the WHO reached the milestone of having 1 million children in Malawi, Kenya and Ghana who have received at least one dose of the vaccine.

After several years of stagnation, this malaria vaccine represents what Dr. Mary Hamel, a medical epidemiologist who works on malaria prevention, called “a historic breakthrough.” In addition to being the first vaccine to provide protection against malaria, the RTS,S vaccine is the first vaccine for the parasitic disease, meaning the development of this vaccine represents not only a breakthrough in malaria research but a breakthrough in the world of vaccine development.

Though the vaccine’s efficacy is modest, its success is a major breakthrough in a decades-long fight against a disease that kills hundreds of thousands of people every year. As the first WHO-recommended malaria vaccine, this vaccine has the potential to save tens of thousands of lives every year and serve as a stepping stone toward future innovations in the realm of malaria prevention.