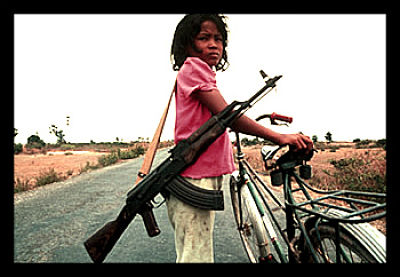 Last month Mikhail Kalashnikov passed away at the age of 94. The legacy he leaves behind centers around the Avtomat Kalashnikov 1947, better known by its abbreviation, AK-47.

On multiple occasions, Kalashnikov has been asked whether he lamented the destruction his weapon has caused throughout the decades. Time and time again he stated that he is not to blame for the death and destruction surrounding the AK-47, but rather it is the failure of politicians to reach peaceful solutions that should be held as culpable.

But, recently, a letter, Kalashnikov wrote shortly before his death, shows that he felt partly responsible for the millions of people killed by the AK-47. The letter was addressed to the head of the Russian Orthodox Church, Patriarch Kirill, asking if blood was on his hands.

“If my assault rifle took people’s lives, it means that I, Mikhail Kalashnikov,…am responsible for people’s deaths,” he wrote.

The Church responded, telling him that if the purpose behind the weapon’s creation was to protect the Motherland then it praises its creator and the soldiers that wield it.

The AK-47 has become more than just a weapon; it has reached cult-like status across the world. From child soldiers living in conflict ridden Africa to American action moviegoers, millions of individuals recognize the weapon but few have stopped to contemplate its destructive legacy.

Part of the reason for its prevalence among rebels and insurgents is the gun’s uncanny ability to function in almost any environment; from desert sands to humid jungles. The gun’s minimalist design seems to be its biggest strength, allowing for durability and ease of use.

Its price also allows it to reach the hands of millions in poorer nations. In many cases it can be purchased for less than the price of a live chicken. Some estimates place the death toll caused by the AK-47 to be 250,000 per year — and rising.

If there’s a nation in conflict one would not have to look far to see AK’s being wielded by rebel factions and terrorist groups.

Part of the reason for its ubiquity has been linked to the former Soviet Union’s push to mass produce the weapon. It gave free licenses for production to “fraternal countries” such as Bulgaria, China, East Germany, Hungary, North Korea, Poland and Yugoslavia.

Unfortunately, once the Soviet Union collapsed many former bloc countries auctioned off their stockpiles. Many African countries jumped at the opportunity and purchased thousands of AKs. For the Middle East, many AK-47s were brought into the country by the invading Soviet forces in 1979. To counteract the Soviets, the CIA funneled hundreds of thousands of Chinese AKs to the mujaheddin rebels.

Finally, when the Soviets left Afghanistan, the arms stockpiles built up during the war did not. Furthermore, It did not take long for the “Kalashnikov culture” developed during the war to spill over into other neighboring nations.

Now, the weapon seems synonymous with western ideas concerning the Middle East. As such, Osama Bin Laden or Saddam Hussein wielding their AKs in front of supporters is the likely image many conjure.

Whether or not Mikhail Kalashnikov is responsible for the millions of deaths caused by his invention is a question that will linger for many. Created by a young engineer desiring to develop an efficient weapon to protect the men he served with, the destruction caused by the AK-47 can be typified by an old proverb: the path to hell is paved with good intentions.