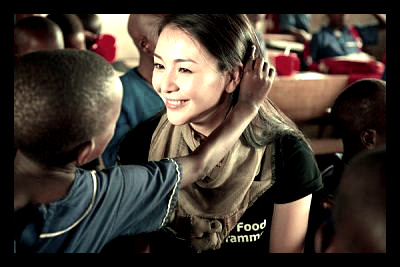 Japanese model Kurara Chibana was recently appointed as the first Japanese National Ambassador to the United Nations World Food Programme (WFP). The 31-year-old model and Japanese celebrity uses her status to bring attention to those communities with scarce food resources and the issues faced in those communities.

As a former Miss Universe contestant, Chibana was the first runner-up for the 2006 competition cycle. The Okinawa native has since focused her energy on fighting world hunger alongside the WFP.

Chibana has held the position of WFP Celebrity Partner since 2007. Chibana has traveled to several developing countries.  To date, those countries include the Philippines, Zambia, Tanzania, Ethiopia and Sri Lanka.

The WFP is the largest humanitarian agency in the world fighting against hunger, and the Japanese government itself has consistently donated to the WFP.

In Tanzania, Chibana visited the Longido district of Arusha. There, Chibana spent time with the children of the Engikaret Primary School, a recipient school of WFP Tanzania. WFP Tanzania provides two meals to over 1,167 schools in regions vulnerable to droughts; meals that feed an estimated half million schoolchildren.

For her part, Chibana shared a meal with the children of Engikaret Primary School and visited the community of one of the school’s pupils. In 2011, donations amounted to $290 million, both from the public and private sector. The funds went to over 30 different countries in the form of foreign aid.

Furthermore, as an ambassador for the WFP, Chibana hopes to learn more about disaster preparedness and emergency protocols following natural disasters.

Oftentimes, celebrity power can draw hundreds of donors to a particular fundraiser that goes toward relief aid. Other times, celebrities such as Chibana use their international presence as a means to draw attention to otherwise globally voiceless communities.