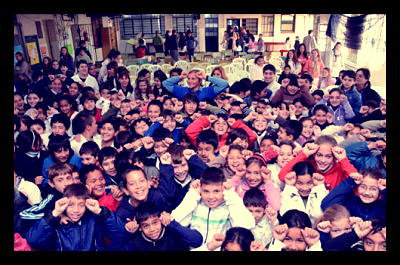 According to the Buenos Aires Minister of Education Esteban Bullrich, 7,000 to 9,000 children aged one and a half months to three years will not be able to attend nursery school in 2014. This number has risen since last year, when 6,700 young children were unable to attend school and receive an education in Argentina.

Parents will either have to pay for a private school or search for other daycares that they are able to afford. Bullrich acknowledge that the Ministry was not able to accomplish and satisfy the expectations of the public.

The shortage of space in public schools and the “failures in the bureaucratic forms of information processing” caused 4,000 students to have to be moved to different schools farther away from their homes, Bullrich claims. This is an issue, particularly because there are no school buses in Argentina, so students have to walk or take some form of public transportation to school each morning.

Those families were initially told that there were vacancies for their students in schools, only to be made aware later that their students had to be removed from the lists.

Bullrich did however highlight that the recently developed online registration process was functioning properly “despite these mistakes.” He stated that although many students were unable to gain spots within the public schools, roughly 100,000 children were able to register and be placed. Statistically speaking, Bullrich says that the system was a success in regards to those who could be placed compared to those who could not.

Bullrich claims that since 2007 more spots have opened up in kindergartens, allowing 20 percent more students to gain an education in Argentina at a young age. There were approximately 45,956 vacancies in 2007 and currently there are 55,607 kindergarten vacancies in Buenos Aires.

The City Education Ministry recognizes that, “No government has achieved this so far.”