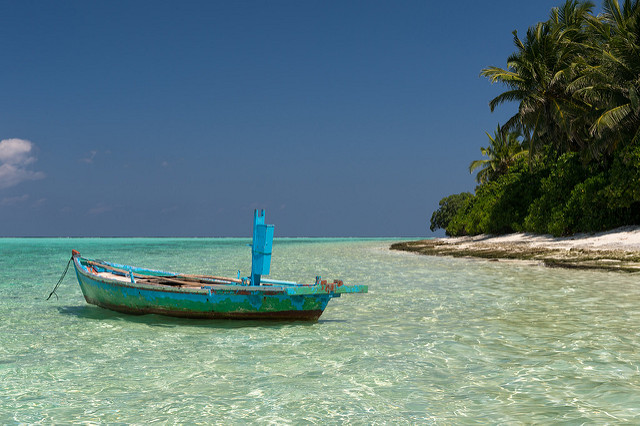 The Republic of Maldives is an island nation located in the Indian Ocean comprised of more than 1,000 tiny coral islands split into 26 geographical atolls. The country spans 90,000 square kilometers and is the flattest country on earth. As such, even the smallest rise in sea levels can have extensive effects on the country’s land mass, infrastructure, agriculture and water quality.

There are many reasons why there are troubles with water scarcity and poor water quality in the Maldives.

The Maldives’ second greatest source of freshwater, after rainfall, comes from groundwater. The groundwater can be found under every island in what hydrologists call lenses. A lens refers to a curved layer of freshwater that floats on top of a denser layer of saltwater. However, as sea levels rise, groundwater becomes contaminated and salinized. Certain estimates state that if sea levels rise by one meter, it will reduce the capacity for groundwater by as much as 79 percent.Since the 1950s, the sea level in the Maldives has been rising by 0.03-0.06 inches every year and is expected to rise, at a mid-level scenario, 1.5 feet by 2100, losing 77 percent of the country’s land area. This will have a significant impact on water quality in the Maldives. Additionally, warmer temperatures continue to allow for high levels of evaporation, which reduces the amount of rainwater left to infiltrate through the ground into the aquifers.

Since the 1950s, the sea level in the Maldives has been rising by 0.03-0.06 inches every year and is expected to rise, at a mid-level scenario, 1.5 feet by 2100, losing 77 percent of the country’s land area. This will have a significant impact on water quality in the Maldives. Additionally, warmer temperatures continue to allow for high levels of evaporation, which reduces the amount of rainwater left to infiltrate through the ground into the aquifers.

Groundwater that remains nonsalinized faces other obstacles, most notably, pollution from poor sewage systems. In the 1970s, rapid development in the capital city, Malé, caused an influx of immigrants from other islands to the capital. The quantity of water being extracted from aquifers increased tenfold, and groundwater pollution increased as well, due to more sewage in the system, causing poorer water quality in the Maldives.

The Maldivian government has been slow to assess the impacts of climate change and groundwater pollution and create policies around water resource management. However, many strides have been made and show positive potential future change.

Saltwater desalination could help provide clean drinking water to not only the Maldivian islands, but to other island nations around the world. In February 2014, government officials met with from the Aquiva Foundation, Memsys, Aquaver, and STELCO, a local power company, to commission a desalination facility on the island of Gulhi. The goal was for the plant to produce up to 10 tons of quality water per day from seawater for drinking, cooking and hygiene.

Gulhi is a small island 600 meters by 300 meters with a population of 1,200 people. Seasonal rain does not provide adequately for year-round water needs, and the island has relied on imported water. Much of the population spent up to 50 percent of their income on safe water, and the rest of the population opted for cheaper, unsafe water which was causing diseases.

The new plant uses captured waste heat from energy generators and membrane distillation technology to power the desalination plants. The desalinated water is then mineralized using local coral sand. The water is distributed through taps at communal water kiosks and must be collected by citizens in reusable containers 1.5-20 liters. The water costs $0.05-$0.07 per liter, significantly lower than imported water.

In 2016, the Aquiva Foundation acknowledged the two-year anniversary of the desalination plant. Despite many bumps in the road, the plant has seen many great successes. It produces up to 10,000 liters of drinking water per day. It is energy efficient, reliable and consistent in producing high quality of water in the Maldives. The success of this plant provides hope to other island nations similar to the Maldives.

The best method to improve water quality in the Maldives is education. Thanks to ample understanding of climate change and NGOs educating citizens on the concerns of sea levels rising, there is potential for improvement. Creating sustainable irrigation to cut down on rainwater evaporation, increasing the number of rainwater tanks and building up infrastructure will all be vital in ensuring that the Maldives continues to have access to quality water.