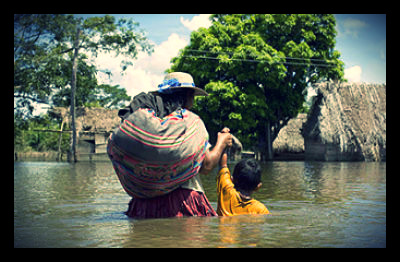 The deluge Bolivia is experiencing since November 2013 has claimed 38 lives from nonstop flooding. Medicine, food and other supplies have recently been delivered. Humanitarian packages are meant to alleviate hunger and provide warmth while combating the disease that floods bring. Malaria and infections that result in diarrhea and topical infections have been reported.

The Ministry of Defense’s aid convoy and evacuation of the local populace in hard-hit regions cannot hinder the continued problems of the flood-filled country. One of South America’s poorest nations, Bolivia has taken a huge hit in infrastructure, roads and most importantly of all, homes. The continuing inundation has disrupted and displaced over 150,000 lives.

Beni, a region taking the brunt of the storm, has over 4,000 displaced families. Livelihoods of farmers have also taken a huge hit. Agricultural products such as corn and wheat are ruined by the torrential season.

Bolivian President Evo Morales has declared a state of emergency for his storm-stricken nation.The charismatic leader has otherwise high hopes and plans for Bolivia. In early January, Morales announced that he plans on building a nuclear reactor, the first in his country.

Before the start of the 2014, Bolivia launched Tupak Katara, its first telecommunications satellite, which was named for a national hero who combated Spaniards during colonial times. The satellite, according to Morales, represented the country’s movement away from foreign assistance regarding communications. Despite such claims, China aided the country in its venture.

Moreover, the coca leaf, the source of cocaine, has been an important platform in Morales’ presidency, particularly its removal from the international list of banned drugs. The coca leaf is a primary product in the livelihood of 40,000 Bolivians—a large part of Morales’ constituency. Since recently assuming the chairman of the Group of 77 nations, Morales vows to reinstate the coca leaf.

Among such accomplishments and claims is the never-ending stream of flooding, with weather reports stating that heavier rainfall will most likely continue for weeks to come. With climate change an ever-present feature in many countries, Bolivia, too, is far from unaffected.