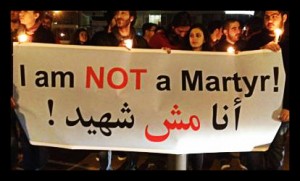 Social media is proving itself once again a vital medium for advocacy.  In a movement reminiscent of the 2011 Arab Spring, the younger generation of Lebanon is organizing on Twitter around the mantra #notamartyr. The online phenomenon was sparked by the death of 16-year-old Mohammad Chaar, a bystander in Beirut.

The December 26, 2013 explosion was targeting former Lebanese ambassador to the United States, Mohamad Chatah. It killed Chaar instead, who was hanging out with friends nearby. The press and government authorities immediately transformed him into a figure of patriotic martyrdom, as is customary in such cases.

According to the subsequent outcries from Lebanese activists, the glorification of martyrs is a problem in their culture and disrespectful to Chaar’s memory. They are adamant that he was a victim, and not a martyr. #Notamartyr is a promotion of pacifism and the choice of life. It also demands that the Lebanese government to be held accountable for violent harms perpetrated against their citizens.

Recent times in Lebanon, and especially in the capital city of Beirut, have seen a lot this type of martyrdom. The country still feels a degree of political and economic instability in the wake of their 15-year civil war, which ended in 1990. Violent spillover and ethnic tension from their neighbor Syria has significantly increased this. Beirut has seen six fatal bombings in the past six months, averaging one per month.

Violence has only resulted in breeding further problems for Lebanon, which is quickly declining into an economic crisis. Limited job opportunities have forced more and more Lebanese youth to reluctantly leave their home country.

The #notamartyr movement has now developed into a means of voicing a wide range of dissatisfaction, along with resolutions for the future. Poverty, corruption and human rights violations are just a few topics highlighted. It is also consciously challenging negative media misrepresentations of Lebanese culture.

As the accompanying Facebook group states, “We can no longer desensitize ourselves to the constant horror of life in Lebanon. We refuse to become martyrs. We refuse to remain victims. We refuse to die a collateral death.”

@LebaneseVoices: I’m tired of head counting my family every other week to check if they have survived explosions #notamartyr #انا_مش_شهيد #لبنان #Lebanon

@Akananmariam: I want my hijab to represent my faith and my love of peace, not my political affiliation or party.

@Safran3: I want to raise my kids in Lebanon #notamartyr #lebanon

@Hamedleila: I would like to hold my boyfriend’s hand without being afraid of the police #notamartyr