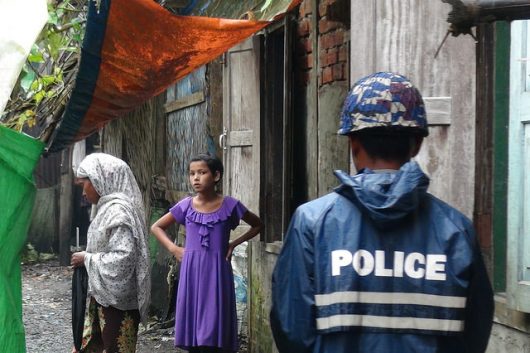 Following recent elections, human rights abuses in Myanmar continue. The new government, which took power in March 2016, has not limited military authority. The 2008 constitution gives the military extensive power within the government with no civilian oversight. This means that human rights in Myanmar are abused for political prisoners and ethnic minorities.

The military government suppressed opposing views and placed thousands of people in jail. People who have dissenting views are harassed, arrested without cause, tortured, imprisoned and sometimes executed. The current number of political prisoners is unknown because there is no clear method to account for them. Political prisoners face inhumane conditions, often without sufficient food or basic sanitation. Prisoners do not receive medical treatment, so many have lasting injuries from initial acts of violence in the prison.

People who speak out about human rights violations are often arrested and detained. This makes it very difficult for people to monitor and document the abuses in the country.

Soldiers rape ethnic women regularly as part of a military strategy. They do not face any prosecution for these widespread crimes. The government denies these reports and soldiers are not prosecuted for these crimes. There is no system for women to report sexual assault in the country. Displaced women are most vulnerable to assault and abductions.

The Rohingya, a Muslim minority in Myanmar, are currently facing human rights abuses. There are around 1.2 million ethnic Rohingya in Myanmar. After outbreaks of violence, media and humanitarian aid groups were not allowed to enter the northern Rakhine State. There have been reports of murder, torture, sexual violence and arrests. Satellite imagery showed 430 buildings destroyed by fire. It is believed that 30,000 Muslims are displaced from their villages. The government did not investigate these offenses and did not seek U.N. assistance.

The Rohingya do not have citizenship in Myanmar. This fact limits both their access to healthcare and education and their movements in the country.

In March 2017, the U.N. agreed to investigate human rights in Myanmar and the attacks against the Rohingya. Hopefully, this probe will bring attention to the abuses, justice for the victims and accountability to the government and military.