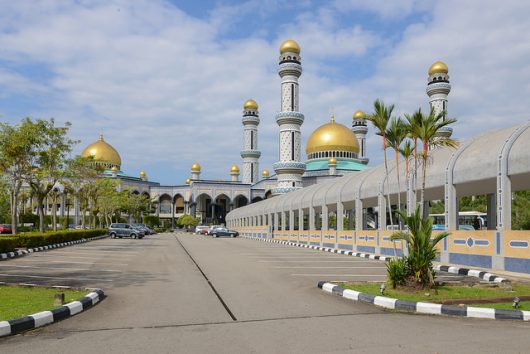 The overall track record of Brunei‘s legal system has been quite good. Despite not specifically outlawing torture, there were no instances of cruel and unusual punishment in 2016. Additionally, there were zero instances of government-instigated murders or disappearances. Although fair and impartial judgment is not guaranteed under the constitution, the majority of cases are uninfluenced by outside intervention.

However, caning is still a legal punishment for most adult males, a punishment that may strike many as barbaric. A major concern for human rights in Brunei is the prison system, which is currently experiencing severe overcrowding.

Not only do some of the legal retributions violate Western human rights in Brunei, the freedoms of speech and press are not protected under the constitution, and under the Sedition Act, the government has severely restricted such basic rights. Any and all public performances must be approved beforehand by a government agency, making any subversive or controversial displays unlikely.

Besides being one of the few countries with sharia law as the basis of its legal code, Brunei is one of the only countries ruled by an absolute monarch. The sultan, Hassanal Bolkiah, maintains absolute power in his country, and has actually enjoyed a good deal of popularity among his subjects.

The approval that Sultan Hassanal Bolkiah has enjoyed is due in large part to Brunei’s high standard of living. It has a good education system, and the per capita GDP is among the highest in the world. Sultan Bolkiah has done a lot of good work to utilize the energy reserves of his country and turn it into a profitable nation. Despite the many oversights related to human rights in Brunei, there remains a large amount of happiness and prosperity.

Is There Hunger in New Caledonia? Why Dominica Is Poor
Scroll to top