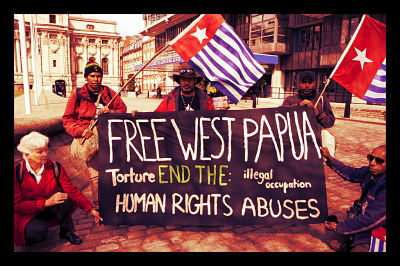 The region of West Papua does not make the news often; in fact, it rarely merits a news blurb in most Western headlines. However, West Papua is arguably one of the most under-reported cases of exploitation an indigenous groups in the 21st century.

The report goes on to state that due to wide scale incursions by Indonesia’s armed forces, West Papua has seen over 100,000 of its citizens die and much of its national resources depleted.

A report by The Guardian also notes the devastating effect that Indonesian resource extraction is having on the people of West Papua. It notes the case of the Mooi people, who are one of the 250 indigenous tribes that are having their way of life destroyed due to the deforestation of their lands by timber and palm oil companies.

The oceans off the coasts of West Papua are also being devastated due to nickel mining in the area, which is flooding the bountiful coral reefs with polluted sediment.

It is not only the eco-system of West Papua that is being destroyed. Even though it has been close to 45 years, the Indonesian military is still cracking down severely on people who are part of the Free Western Papua Movement.

Last year, the Free Western Papua Movement’s Facebook published the photo of a dead Papuan named Edward Apaseray, who was reportedly tortured and killed by the Indonesian Special Police Forces for being a “separatist.” The Diplomat, a current affairs magazine for the Asian-Pacific region, published a report in which a recent study noted that in West Papua, an incident of torture occurred every six weeks for the past half-century.

The human rights organization Tapol that monitors human rights abuses in West Papua published the story of Yawan Wayeni. He was a tribal leader and formal political prisoner who was tortured and killed by Indonesian security forces in brutal fashion.

One of its members, Benny Wenda, an exile from West Papua, recently had an article published in which he decried the recent statement of Australian Prime Minister Tony Abbot, who stated that things in West Papua are “better and not worse.”

West Papua is one of the forgotten atrocities of the 21st century; the responsibility making sure that it does not continue to be rests with us and our elected officials. The Arab Spring occurred with the help of Facebook and a determined populace. The plight of West Papua needs the same type of support from those who have the ability to stand up to the Indonesian government.