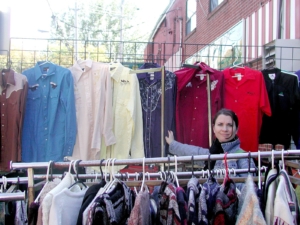 The gentrification of thrifting is impacting the availability of second-hand clothing for people in need. Although thrifting existed from the late 19th to early 20th centuries, it had not gained widespread popularity until the 1970s onward. Furthermore, the scale at which this now $119 billion industry operates signifies its importance to the fashion industry and mass media. While thrifting has captured the interest of many young consumers, the consequences of this overconsumption prove to be more harmful than initially intended.

The History of Thrifting

Thrifting has existed for centuries across various cultures, but it was not until the late 1800s that thrift stores began to appear all across the U.S. As immigrants integrated themselves into the evolving American culture, they struggled to be accepted by mainstream society, often seen as those who took opportunities away from U.S.-born citizens. Many low-income individuals sought to create secondhand shops in collaboration with the Salvation Army, however, secondhand clothing held a stigma that deterred the general public.

At the turn of the 20th century, these locations began to change their marketing tactics to resemble popular department stores emerging at the time. From then on, they appealed to a broader range of people and the stigma began to disappear. It was not until the last half-century that modern thrift stores aligned with popular fashion, moreover when maximalism became all the rage.

Throughout the mid-to-late 2010s, fashion companies worldwide, including Levi Strauss and H&M, formed an arrangement to push sustainable fashion to the forefront of their businesses. Their proposed sustainable options could not come to fruition without addressing the issue of unethical production methods. Once fast fashion increased in scale, garment producers overlooked the human rights side of the equation. Tragedies like the Rana Plaza garment factory collapse in Dhaka, Bangladesh, sparked the question of ethical textile creation. Thus, thrifting presented an easy switch for consumers. Furthermore, with the increase in internet use and micro-trends perpetuated by the COVID-19 pandemic, thrifting gained traction like never before.

With the upward trend of maximalist fashion —a style that incorporates layers, patterns and other eccentric accessories— consumers acknowledged thrifting as an affordable shopping alternative. This craze began among teenagers and the advent of social media platforms such as TikTok and Instagram has merely increased its appeal. Environmental friendliness and avoiding exploitative labor justify the transition from fast fashion websites to secondhand stores. Influencer culture has also weaved itself into the mix, triggering this overconsumption and gentrification of thrifting.

Thrift stores, designed to benefit low-income communities, have been under fire for increasing the prices of secondhand clothing in recent years. Although a majority attribute the online reseller to be the pivotal cause of this shift, more often than not, thrift stores are raising their prices to maximize sales from wealthy shoppers.

The issue pertains to demand rather than the supply of donated goods. The desire for thrifted items has increased, so much so that it is becoming difficult for low-income people to access this support network. Moreover, thrifting has positively benefited the environment and human rights issues. However, psychological determinants, especially among impressionable youth, also play a role.

Changes in the Thrifting Market

A study in Vietnam displayed the growing second-hand market as well as the impacts of social class and cultural perceptions. While many western countries have developed an affluent thrifting environment, others have blurred the lines regarding the practice due to external influences. Some feel good about their decision to thrift due to its low cost and benefits to the environment while others stay away because of lingering social stigma. Each country is attempting to develop its own stance on second-hand goods, but a general consensus has yet to be reached.

Clearing up Misconceptions and Finding a Solution

Misconceptions about thrifting have emerged over the years. Supply is a common segway for thrifting advocates to guilt affluent consumers out of purchasing secondhand. The sheer number of donated clothing has skyrocketed since the pandemic began, but only around 20% become in-store inventory for selling in secondhand shops. The rest are either sent to warehouses to ship to overseas markets in sub-Saharan Africa or end up in landfills. It is an act of overconsumption as an ideology that has erected a majority of the damage; even more so than resellers of thrifted clothing.

Rather than citing specific groups that have contributed to the steepening prices, the best solution to combat the gentrification of thrifting is to spread awareness and encourage ethical buying behaviors, such as avoiding “high-need items in low stock” or simply buying an item that one can use for an extended period of time. Another alternative may be purchasing from vintage clothing or consignment sites that are not geared toward the low-income demographic. This way, one streamlines where their clothing originates from and can avoid situations where the seller mass purchases items from mainstream thrifting locations.

By addressing the gentrification of thrifting through conscious thrifting behaviors, secondhand shops can still serve the people most in need.